Role of genomics in assessing risk, especially in ovarian cancer

Dr Sellers talks to ecancertv at the AACR conference about his work in the field of molecular epidemiology. He stresses the need for an open multidisciplinary approach when gathering and sharing data and looking at how cancer can be prevented.

Specifically, he talks about how genomics can better inform us, not only to genetic susceptibility but the very mechanism of cancer itself.

He pays particular attention to ovarian cancer and the measures that can be taken to best prevent the disease in different individuals by better detecting their individual risk, noting the advances that have been made in this area.

Role of genomics in assessing risk, especially in ovarian cancer


Can you tell us a little about molecular epidemiology?

Molecular epidemiology is an intent to use observational methods to understand causes of cancer. We’ve always done things typically through asking questions of people – tell us about your occupation and your family history of cancer and measure their height and weight, things like that. But we have access now to tools that really allow us to probe more on the biology of disease. So the strategy now is to take questionnaire information and medical information and integrate it with what we can measure from samples of the tumour or blood samples or urine samples. The reality is as a discipline everybody has been really focussed on their little piece of the puzzle and it’s time to pull the pieces together. Cancer is complex, we study it in model systems, but by putting all of the pieces together and add layers and texture we can help hopefully understand the complexity of cancer and make meaningful progress, not only in understanding the causes of the disease but maybe things that we can do to prevent it or to inform better treatment.

Do you look at specific types of cancer?

My research is on ovarian cancer and we know that there are types of ovarian cancer that run in families and we know that there are families that have clustering of ovarian cancer with other cancers but it doesn’t seem to track in multiple generations. What we’ve learned over the last few years, really enabled by advances in technology, is that in families with a very strong predisposition that is because of mutations in the genes. That’s really straightforward, we get that. What we’ve learned though is that only about 2% of our genome codes for proteins. We always thought the rest was just junk and it didn’t make sense and that was because we really didn’t understand its function. Now we understand that the rest of the genome, or the vast majority of it, is actually transcribed, it’s active, it’s being read and it’s doing so in response to probably the environment. It’s telling that 2% of the genome that’s coding when to turn on, when to turn off, the amount, etc. So that’s what we’re learning really through our genetic susceptibility studies is that it’s not in the proteins but it’s the regulatory region of the genome which is much more advanced. But in order to understand it it requires that we look not only in our germline DNA, what we inherit from mum and dad, but looking at what’s happening in cell lines, looking at what’s happening in the tumour and creating models that bring all of this information to bear to try to understand what’s really driving cancer in the first place.

Do you  look at environmental factors?

We have had some interesting discoveries. For example, one of the first genes that we found in ovarian cancer is something called Tparp. What is that about? Well, Tparp turns out to be one of the first genes that responds when you expose cells to dioxin. Dioxin we know is an animal carcinogen, it’s ubiquitous in the environment, we’re all exposed, but we’ve never been able to pinpoint it as a cause of human cancer. Now, epidemiology, which is my discipline, is a blunt tool and it’s hard to always show associations for something that’s very common with particular risk but it may be through genetics that would give us a signal that, for a susceptible woman, Tparp might enable the dioxin to increase risk of ovarian cancer. So we’ve always talked about candidate genes for the past decade or so, we think we understand the biology and that will help us understand what’s causing cancer. We can now use genetics to maybe understand the things in the environment that are causing risk that before we wouldn’t have had a tool to do that.

What about cancers which are hard to detect?

You hit on a really important point and that is ovarian cancer is a silent killer, there are no signs or symptoms or anything that’s really specific. So what can we do about it? As we understand the genetic basis some of those could be markers that you could pick up in urine or a blood sample but also we have an opportunity to prevent ovarian cancer. We’ve known about some things that can lower your risk for sure but if we could identify the percent of the population that is especially susceptible we might be able to give the right type of intervention based on the level of risk. For example, we’ve known for a long time that women who take oral contraceptives lower their risk of ovarian cancer by 40% and it seems to be a fairly long-lasting intervention. It’s not a very dangerous intervention, it’s fairly easily done, well tolerated etc. But there are other things that you could do. For example, women who have their tubes tied also have their risk lowered but it’s a surgical intervention, fairly common, reasonably safe but you don’t want to be doing that for everybody. The extreme is having your ovaries removed and for women who are after their child-bearing years that’s probably not unreasonable but you don’t want to be doing it willy-nilly, you really want to reserve that for women who are really at the extremes of the distribution. So we hope and believe that if we can get to women who have a 10% lifetime risk of ovarian cancer, that’s a threshold that enables clinical interventions. So we’ve got some things that we know work, now it’s just a matter of finding what’s the level of risk with the level of prevention. Because until we can detect cancer early and until we have effective treatments for ovarian cancer that would be the way to start.

What about people who are known to have a high risk?

There’s not that much that we can do. There are some things that the epidemiologic literature suggests increase risk but they’re common to many cancers. Smoking may increase certain subtypes, obesity may be bad, hormone replacement therapy may increase risk. But these are things that you wouldn’t do specifically to lower ovarian cancer risk, they’re things that… nobody should be smoking, right, regardless and it’s not just cancer it’s cardiovascular disease risk. But oral contraceptives is probably the easiest thing to do, five years duration, and the benefits seem to be for almost thirty years now, based on the literature.

That’s the risk part of it and it really depends on the formulation of the oral contraceptive. So it’s something that has to be considered in discussion with one’s physician and moderated.

The last thing I would want to say is just over the past few years we’ve seen a tremendous change in how scientists collaborate. The advances that we’ve made in ovarian cancer is because people who are working in isolation recognised that our sample sizes were too small to really have impact. We’d better start talking to each other and we’d better start sharing hypotheses and sharing data even before they are published. Over just the last eight to nine years I’ve seen it progress from a point where we would show our data before they were published and we would allow each other to generate hypotheses in data and we would pool it together to now we’re actually sharing DNA samples and sending them off to remote sites. Our consortium has grown from just a handful of studies to now 67 across the world. Basically every single study in the world on ovarian cancer, people are coming together. And that spirit of collaboration and teamwork is essential for us to make significant progress in the fight against cancer. It’s, to me, a paradigm shift. We’re not competing with each other, we’re combining forces to compete against cancer. I see that not just within our group but really across scientists, especially with the young people coming up. I think that’s a great sign and everybody who is watching and listening should be pleased to hear that the scientists and the clinicians and the nurses and everybody who cares about cancer really coming together to join forces and have a big impact.

22 Oct 2018
The past, present and future of treating ovarian cancer
Dr Susana Banerjee - The Institute of Cancer Research, London, UK 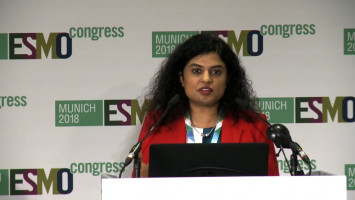 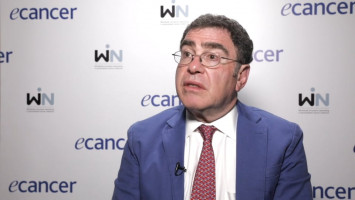