Dr Shapiro talks to ecancertv at SABCS 2013 about the inhibition of poly (ADP-ribose) polymerase (PARP).

PARP inhibition results in synthetic lethality in cells that have impaired HR, such as BRCA-deficient cells. In breast cancer, the primary activity of PARP inhibitor monotherapy has been in those cancers arising in BRCA carriers.

Inhibition of cell cycle kinases can be used to manipulate the activity of DNA repair pathways, creating exploitable cellular backgrounds that have increased sensitivity to DNA damaging agents.


I presented work on PARP inhibitors which are a rapidly emerging drug class for BRCA deficient breast cancers and some work on another set of drugs that inhibit cyclin-dependent kinases, so CDK inhibitors. PARP inhibitors are an emerging new class that’s looking very exciting for tumours that are BRCA deficient. These would be breast tumours, for example, that arose in a BRCA carrier, someone who inherited a bad BRCA gene and then the tumour becomes BRCA deficient. The simplest way to explain these drugs is that they affect DNA repair. Our DNA is under attack all day long, we’re under constant assault, it’s always being nicked and in order to repair those nicks we need an enzyme called PARP. When PARP is inhibited then the tumour relies on more complex pathways to repair damaged DNA and that’s a pathway called homologous recombination which is mediated by the BRCA proteins. So you can imagine in a tumour that retains BRCA, that tumour can survive a PARP inhibitor because the PARP will inhibit the PARP enzyme but the repair can still occur because the BRCA proteins are there. In a tumour that lacks BRCA the PARP inhibitor will be lethal because there’s no backup pathway when the PARP inhibitor is inhibited. So PARP inhibitors have had very good activity in BRCA deficient cancers and so far in breast cancers that lack the BRCA proteins, the activity has been promising enough that these drugs are now moving into phase III registration trials. Most of the trials are comparing a PARP inhibitor to the investigator choice for standard chemotherapy and we’ll see if the PARP inhibitors look better and hopefully this will lead to their FDA approval.

Are you working on any trials at this time?

Many breast cancer physicians are involved in some of the phase III studies. There’s one of a drug called niraparib which is from a company called TESARO; in addition a second company that has a phase III study ongoing in breast cancer is BioMarin which is looking at BMN 673. Some of the other companies are focussing their PARP inhibitor programmes a bit more on ovarian cancer but those are two that are ongoing now in breast cancer.

One of the issues with the PARP inhibitors is that so far for breast cancer patients the activity has been primarily when there’s a BRCA deficiency, so when the patient’s a BRCA carrier and then the tumour they develop is BRCA deficient. So one thing that we’ve been working on are strategies that might extend PARP inhibitors to all patients with breast cancer, so how are we going to make these drugs relevant for much larger groups of patients? One strategy is to try to disrupt the BRCA in the cancer cell and make it sensitised to PARP. The strategy that we’ve taken on to do that is one using a set of drugs called CDK inhibitors. CDK inhibitors are also looking interesting in breast cancer but we’re using in particular a drug that hits a CDK family member known as CDK1. When we can block the activity of CDK1 we can actually disrupt BRCA function specifically in the cancer cell and sensitise that cell to a PARP inhibitor. So, we’re trying to develop a combination of a CDK1 inhibitor and a PARP inhibitor used together to allow us to have the benefit of PARP inhibition even if the tumour has a BRCA present. So we’re developing a clinical trial, we have a phase I clinical trial ongoing at our own institution that’s looking at a combination of a CDK1 inhibitor called dinaciclib combined with one of the PARP inhibitors.

Do the combinations in those trials create any toxicity?

So far they’ve been well tolerated, that is always the issue. So in a strategy like this you can imagine that if we’re going to disrupt the BRCA function and sensitise the cell to a PARP inhibitor it would have to be very selective for the tumour cell. If we did that in all cells we would make the strategy very, very toxic. So far for the CDK inhibition there are slightly different ways that tumour versus normal cells handle those drugs and so far it’s looked very selective, meaning that there has been very little toxicity in the trial. So for this strategy it seems to be selective enough for the tumour cell that the toxicity has not been an issue. Now the caveat is that we are still dose escalating and so we are still in what’s called the phase I portion of the study which is the portion of the study designed to arrive at the maximum doses that are safe to administer of each drug when we’re putting this combination together so we’re not at the highest dose level just yet. But so far we’ve been encouraged by the tolerability so far.

We’ve treated around thirty patients and we’ve had several triple negative breast cancer patients. These are triple negative breast cancer patients whose tumours are still BRCA proficient so these are not the group that would have inherited the BRCA gene. We do have some patients who have been on the study for more than six months with stable disease so we are encouraged by that degree of stability and we hope that as we continue to escalate we will see actual partial responses and some bona fide clear activity in this group.

Are there any trials looking to develop something similar?

There are many strategies now that are being looked at to try to disrupt BRCA function and sensitise a cell to a PARP inhibitor. So there are some other studies going on, the most prominent of which is one that’s being done through the Stand Up to Cancer programme where there’s an attempt to look at a combination of a PI3 kinase inhibitor with a PARP inhibitor. Again, there the PI3 kinase inhibition seems to disrupt BRCA function in the cell, perhaps in that case it’s affecting the levels of BRCA protein in the cell and sensitising the cancer cell to PARP inhibition. So there are several sites in the country, I think this is going on at Dana Farber, Sloane-Kettering, MD Anderson, where there’s a combination of a PI3 kinase inhibitor and a PARP inhibitor and the strategy is the same, it’s to disrupt the BRCA protein and sensitise the cell to PARP. 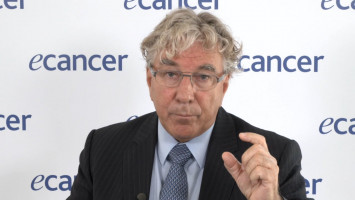