HER2 positive breast cancer treatment, past and future

Dr Perez talks to ecancertv at SABCS 2013 about HER2 positive breast cancer treatment such as trastuzumab, pertuzuamab and multi-gene profiling.

HER2 positive breast cancer treatment, past and future


My interest in HER2 started back in the early 1990s when the drug was being developed and actually I was able to present the culmination of a lot of our work yesterday as I received the Susan G. Komen Award for clinical translational research in which we were able to address some of the clinical advances that we’ve been part of, additionally address some biomarker work that we have done in the context of the work that we’re doing now as well as the future.

So, to be more specific, we were one of the first groups that started looking at the validity of HER2 testing – how do you test for HER2? What were the cut-offs that physicians should use to make decisions related to what patients should be eligible or be considered for anti-HER2 therapy? So that was really seminal work that has culminated in us being part of the 2013 updated ASCO/CAP HER2 testing guidelines that are to be used in the United States and all over the world. But in addition to looking at biomarkers I’ve certainly been very interested in the things that we can do to help people’s lives. So we have looked at a variety of anti-HER2 agents, trastuzumab, lapatinib, in the metastatic as well as in the adjuvant setting and that interest has been to evaluate efficacy but also to evaluate tolerability. Some of our trials really have translated into changes in standards of care globally, specifically using trastuzumab for one year concurrent with taxane in the adjuvant setting. We have shown the cardiac safety data associated with that. So it’s been a total honour and pleasure, a privilege, really, to be part of this type of research that can impact the lives of so many people all over the world.

In addition to looking at HER2 as the main target, we have been exploring whether there are other biomarkers that can help better explain why some patients benefit from anti-HER2 therapy and others don’t. So we’ve looked at many, many different things; we’ve looked at IGFR, we’ve looked at PTEN and the bottom line from our research is that none of these single markers appear to be relevant. In other words, patients benefit from adjuvant trastuzumab independent of tumour expression, IGFR or PTEN. This is really important because many people thought that tumours that did not express PTEN were going to be resistant to trastuzumab so I’m very glad that our research has been able to clarify that misconception. But in this area the next level is really to look at multi-gene profiling and I was very happy that I was able to comment on that at my lecture presentation yesterday because our group has been able to identify the group of genes, actually, associated with the immune system that appear to be associated with benefit to adjuvant trastuzumab which, of course, is a very important finding.

The next step in our gene research, looking at multi-gene profiling as a prognostic or as a predictor of benefit to adjuvant trastuzumab is actually to publish the data in a peer reviewed manuscript and, number two, we want to validate our results using specimens from other trials. I feel so happy that several collaborators from around the world have already told me that they will send their specimens so that we can validate our gene signature.

What is the difference between pertuzumab and trastuzumab?

Both pertuzumab and trastuzumab are monoclonal antibodies against HER2 so the issue is that they bind at different spots of the HER2 protein. So actually they appear to work together quite well, they are always used in combination. So, certainly in the adjuvant setting only trastuzumab is approved; in the metastatic setting now there’s the approval of using chemotherapy in combination with trastuzumab and pertuzumab so we don’t use pertuzumab alone. This is very different than what’s happening in the development of TDM1 where TDM1, the drug antibody conjugate against HER2, is typically used as single agent. I want to increase the cure rate of patients with HER2 positive breast cancer so I believe that this translational work that we and others are doing will increase the possibility of many more people being cured. So that’s the future.

Advances in prostate cancer in the last 10 years and a glimpse to the future
Prof Laura-Maria Krabbe, Prof Karim Fizazi and Prof Johann De Bono 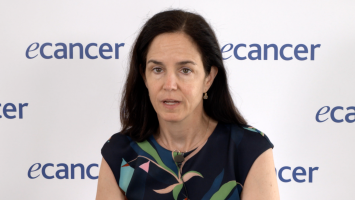