Dr Fred Hirsch talks to ecancer at the 2013 ASCO Annual Meeting in Chicago about the need for molecular testing in advanced non small cell lung cancer and advancements in treatment with crizotinib.


Dr Hirsch, it’s lovely to have you here because you’re really into the whole business of molecular testing and what sorts of molecular testing need to be done. I know you’re interested in ALK, I know you’re interested in EGFR. Tell me, what does the cancer doctor make of this? There are all sorts of possibilities, aren’t there, what kind of testing should be done?

Currently there are two tests that are associated with approved drugs.

And this is, of course, non-small cell lung cancer we’re talking about.

And there are some interesting presentations being made here at ASCO and in The New England Journal about crizotinib too and I’ll ask you about those later. So the testing, then, you look for EGFR, you look for ALK, when you find them what do you do?

When you find those molecular abnormalities, and EGFR mutation occurs in around 10% of advanced non-small cell lung cancer, the ALK gene rearrangement occurs in about 3% of patients, there are small populations but when you find them it is important because you have drugs which clearly prolong the progression free survival and response rate.

So these days we’re not looking for therapies that work in all cancer patients, we’re looking at the fine detail at ones that will have a big effect but in a small number of patients.

Right. And we will see more and more over the next few years; we almost identify new molecular abnormalities every month. That is not…

Yes, exactly. And we are seeing also presentations here with new molecular fusion abnormalities which might in the future lead to new drug developments targeting exactly this small population.

A busy cancer doctor has a patient with advanced non-small cell lung cancer, may already have been treated. This cancer has the EGFR mutation, what’s the next course of action?

So if the patient has an EGFR mutation he or she should be treated with an EGFR TKI up-front. Now, at progression it is still a question whether the patient should continue with the EGFR TKI or should switch over to more conventional chemotherapy. There are studies looking into that; there is a biological rationale for if there is a slow progression there might be beneficial to continue with the EGFR TKI but we don’t have clear evidence for that yet.

Now, you’ve got different agents that inhibit EGFR, haven’t you?

We have the small molecules, two of them, the two brothers – gefitinib and erlotinib. We have monoclonal antibodies, the most advanced in clinical studies has been cetuximab which has in a big study shown significant effect in survival but not dramatically enough for being approved neither by the European regulatory system nor the FDA in the United States. But there are other monoclonal antibodies out there in clinical trials and we are awaiting results from them. One of them is necitumumab which I happen to be involved in in the clinical studies but we don’t have the data yet.

So in modulating EGFR to make your cancer patient better, where’s the smart money at the moment?

For EGFR? For a scientific community I don’t know where the money is but for the scientific community the challenge is now to clearly identify resistant mechanisms so we can in the future plan better combination therapies in order to overcome resistance. Now the hot topic in lung cancer these days is beyond EGFR, it is ALK and ALK inhibition and we have seen very, very promising results. You mentioned The New England Journal of Medicine.

Right, so we’ve got two papers from Boston, in fact. Crizotinib versus chemotherapy in advanced ALK positive lung cancer, what are you making of this?

As a second line.

And it was clear superiority for crizotinib in that setting which is not surprising because crizotinib was approved very rapidly based on phase I and phase II data in second line therapy. We saw amazing results with the progression free survival around 10-12 months and amazing overall survival in this particular subgroup.

And the other paper from Boston being released virtually as we speak, here at the ASCO meeting, is acquired resistance to crizotinib from a mutation in CD74, is it CD74-ROS1? Now tell me about that, what’s the hazard of resistance?

The challenge for ALK inhibitors as well as for EGFR inhibitors is we have very encouraging effects seen with single agents but we haven’t cured the patients yet. In order to cure the patients we need to know what are the resistant mechanisms and how do we overcome resistant mechanisms? It shows up that there are different acquired resistant mechanisms; there are new mutations coming up, that is both for ALK and for EGFR. There are other important pathways which we eventually can target with another targeted therapy. So in the future we might see combinations of targeted therapies instead of single agent therapy.

What are the differences emerging also with relation to adeno versus squamous?

Lung cancer has been, in many parts of the world, something of a neglected disease. Partly the psychological social reasons thinking people get it because they smoke but it sounds from what you’re saying there is a lot of hope of really doing something about it. Am I painting too bright a picture there?

No, I think we have seen over the last couple of years amazing progress in lung cancer. You’re absolutely right, it is a group of patients which are heavily stigmatised because of smoking. We are under-funded significantly in research compared to breast cancer, prostate cancer where there are a lot of survivors who can advocate for research money. But what we have seen recently in lung cancer is, one, we have seen screening results. Screening with spiral CT has reduced lung cancer mortality by 20% in a large randomised study in the United States and that is a significant breakthrough.

Finally, to summarise, then, the benefit of doing the molecular testing you’re talking about and plugging in to some of these targeted therapies. How would you sum that up for the busy cancer doctor who is struggling to treat patients today?

Molecular testing and new drugs attached to that have been in advanced disease and for a busy cancer doctor I think it is two things they need to focus on at this stage beyond the research setting. That is EGFR mutation and ALK testing and that should be routinely done; it is crucial for the choice of therapy in first line treatment.

Fred, at that point we’ll leave it. But thank you very much for spending this time with us here at ecancer. Lovely to see you.

My pleasure. Thank you so much. 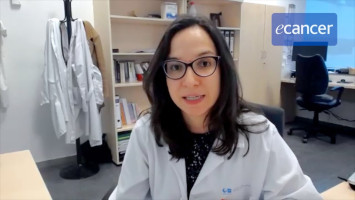