Dr David Lane talks to ecancer at the IFOM-Kyoto University Joint Symposium in Milan about an inhibitor of the p53 pathway, which was previously thought to be impossible to develop.

Dr Lane also discusses the advances in the use of antibodies for imaging and a shift to more biologics due to recent clinical success.

There is a drug now in the clinic from Rush Pharmaceuticals which is an inhibitor of the interaction, something that many people told us when we started was impossible and many a grant was turned down because we were told you can’t block a protein-protein interaction with a small molecule. So it’s very exciting at that stage to finally have the molecule. But one of the things you realise in science is you’re never as prepared as you ought to be when you go into the clinic and I think it’s rather shocking in a way for all of us working away on p53 none of us have truly considered in detail which patients should be treated and why. So some very obvious rules: it will never work in a patient who has got a mutant p53. But if we look in a leukaemia like acute myeloid leukaemia where they have seen some positive responses to the drug in early trials not every patient is responding. Now we look in the laboratory and we find lots of things that we didn’t realise, that there are mechanisms of resistance and how those mechanisms of resistance arise; primary resistance this is, so some leukaemias respond very well, some don’t.

So it’s an exciting phase but I’m quite concerned that we may lose the ball. We’ve just got to the point where the pharma industry is very interested but their attention span can be short and if we don’t really come up with the right clinical conditions and the right biomarkers quickly there could be a reduction in interest. So the key goal at the moment is to try and pick very carefully the right patients for the trial and to start understanding what biomarkers are going to tell us, who is going to respond, who isn’t.

I guess one of the things I’ve got very excited about is potentially a new class of medical molecules. So we’ve been working with a technique called peptide stapling. So for many years we were probing these protein-protein interactions with short peptides because by and large it is the recognition of a peptide sequence on one protein by a pocket on the other that’s the basis of these molecular signalling pathways. Getting small molecules to interrupt that kind of interaction has been a lot of work, there are only two currently in the clinic, one the Abbott drug for BCL2 and the other the Roche drug for MDM2. But a technique called peptide stapling allows you more easily to make molecules that will block these interactions because these stapled peptides, as their name suggests, are derived from the original active peptide and then we put in additional chemical crosslink. This has enormous potential, the molecules look very promising and they’re much more easily discovered because you’re starting off essentially from nature’s template.

And easy to make?

Yes, relatively. Peptide synthesis is fast and efficient and peptides are now used very widely in medicine. It’s a huge scale so they can made at the kilogram scale. The difficult part is putting in the staple itself, it’s not technically that difficult but you have to put it in in exactly the right place. So we’re doing a lot of molecular modelling. The magic property comes in – why do some of these stable peptides go into cells so well and others don’t? But the progress is fast now, we’re beginning to really learn the rules. So I’m very excited about that.

Could you talk a little about the micro-antibodies?

This is another area where things are moving very fast and that is really the success of antibodies is huge now in oncology and elsewhere. The sophistication of antibody engineering is increasing enormously so I’ve become involved in that process as well. And antibodies for imaging is beginning to develop very fast as well. So we’re going to see a move to more and more biologics. It’s where, actually, clinical success is coming now. Small molecules seem to have had a lot of late stage failures whereas with the peptides and the antibodies if they show good responses in early clinical trials you generally seem to be able to get them through. There doesn’t seem to be the same lurking strange toxicities we sometimes see with small molecules. So it’s an interesting time.

What are some of the synergies between your institute and the one here in Milan?

I think there are tremendous synergies. We just had lunch and discussed it. I think one of the problems with science now is it’s so complex and to be at the cutting edge you need to accumulate so many tools and equipment, strains of mice, all these things. But it’s very hard to have everything you need in your own environment. Even at the Biopolis in Singapore which was built to be a cluster of activity, I look around, there’s nobody working on splicing in the whole… there is very little neurobiology. So if I need those connections you need to be mobile. I think forming these networks is tremendously powerful. Just at lunch today we found out several potential things and I’ve spent a couple of days here at IFOM talking to people. It’s great, immediately I can see things that I can do. So I think science always progresses best when unexpected links arise or unexpected synergies and for that to work you need to have real experts in their discipline, maybe with a particular technology working, and then you bring your problem and it’s solved because of that different approach. I think that’s been one lesson of my career, absolutely. Training as an immunologist was great for me and then I moved into virology and I actually still benefit from that switch. I think having multiple prongs to your approach is very important. 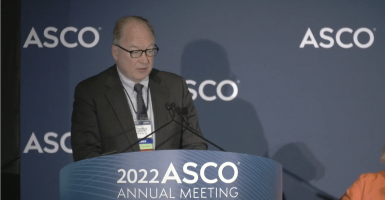