Dr Roberto Labianca talks to ecancer at the 2012 ESMO meeting in Vienna about the difficulty in treating pancreatic cancer and immerging therapies.

Nearly all patients with pancreatic cancer die from the disease within a small timeframe after diagnosis.  Only 20% of all patients can be resected, therefore most receive radiotherapy. Even with these treatments, the results are very limited.

In addition, numerous biological studies are taking place in order to open up new targets for potential biological treatments.

We are speaking about pancreatic cancer. Pancreatic cancer is a very, very serious disease because there is a lot of mortality for this cancer; nearly all patients die of the cancer in a relatively short time. Only about 20% of patients can be resected for pancreatic cancer, so most of them should receive medical treatment or radiotherapy or both the treatments together. But the results, usually, are very, very limited. Now we are lucky that we have some new treatments for this disease; essentially we have new drugs. One important drug, for example, is nab-paclitaxel, which is a new antiblastic drug with a new mechanism of action and we have promising data from a phase I/II trial in the US. Now there is a large phase III trial on-going comparing nab-paclitaxel plus gemcitabine versus gemcitabine. Gemcitabine is the so-called standard treatment for pancreatic cancer. We do not have yet the results but I think that there is a good promise for new data, a new advance in this disease.

What were the results from the phase I study?

The phase I trial demonstrated about 50% of patients with a control of disease and a longer considered disease, a survival time of about one year in patients with metastatic disease, which is really new and important data according to this cancer. Another important point is that in patients with cancer without involvement of the head of the pancreas and without a bigger extent, these patients are a minority of patients, they are not representative of all the patients, but in these patients you can use an aggressive treatment, an aggressive chemotherapy treatment, and the regimen is called FOLFIRINOX. We have three drugs together; there was last year an important trial performed in France comparing FOLFIRINOX versus gemcitabine and, again, there is a median survival time of about one year in comparison to a few months with gemcitabine alone. So these trials are very important to define an active treatment in some populations of patients.

Then we have a lot of studies about the biology of pancreatic cancer. Unfortunately at the present time we do not have really active biological drugs but the studies are going on, we have new possibilities of studies in these patients and we hope that the future will be more bright than it is until now.

Where could these new possibilities lie?

Why does pancreatic cancer have such bad prognosis?

There are several reasons, one is that it is difficult to have early diagnosis because the organ is very deep in the abdomen so it is difficult to have symptoms until you have pain, you have weight loss and so on. So usually diagnosis is performed late in the history of this cancer. Then there is also an intrinsic resistance of the tumour cells to therapy because we have tumour cells inside a stroma, fibrotic tissue, so it is difficult that a drug can arrive inside the tumour cells. That’s why chemotherapy usually is very difficult to have an activity against pancreatic cancer. Many patients are elderly patients so this is another reason for difficulty in performing active treatments. Also, surgery is a difficult surgery so I don’t think that every surgeon can operate on patients with pancreatic cancer. We need referral centres, we have referral centres but we need more referral centres in order to have better surgery and also better radiotherapy and so on. So the challenge is very difficult to perform.

What about tackling the stroma itself?

To have an action against the stroma it is important to have drugs which can, for example, local chemotherapy inside the tumour cells. That’s the case for nab-paclitaxel because there is an action of this drug on the vessels, on the stroma and the gemcitabine, for example, can arrive in a higher percentage inside the tumour due to the action of nab-paclitaxel. So it is important to have organised treatment with two different drugs, two different ways of action. 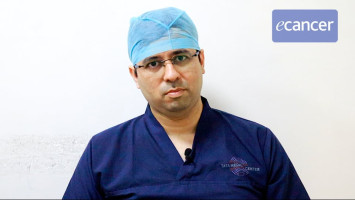