Dr Mark Litzow speaks to ecancer about a study he presented at ASH 2022 on consolidation therapy with blinatumomab in newly diagnosed patients with B-Lineage ALL in MRD negative remission.

Our trial was looking at the role of the addition of blinatumomab to chemotherapy in patients who are MRD negative after induction chemotherapy. Blinatumomab is a bispecific T-cell engager molecule that has been approved by regulatory authorities in multiple countries for the treatment of patients with relapsed/refractory acute lymphoblastic leukaemia and also for patients with B-lineage acute lymphoblastic leukaemia who are measurable residual disease positive, or MRD positive, after treatment. In our study we wanted to see if the addition of blinatumomab to chemotherapy had a role in patients who become measurable residual disease negative after their induction chemotherapy.

What was the methodology used in the study?

We took patients between the ages of 30 and 70 who did not have the Philadelphia chromosome or the BCR/ABL gene rearrangement with B-lineage acute lymphoblastic leukaemia and we gave them 2.5 months of standard induction chemotherapy using a BFM-type regimen. If they achieved a morphologic remission with less than 5% blasts in their bone marrow then they could continue on study and they got one more round of chemotherapy, an intensification with high dose methotrexate and PEG-asparaginase to prevent the development of leukaemia in the central nervous system.

At the discretion of the treating physician, patients could be taken off of chemotherapy and go to an allogeneic transplant using any conditioning regimen or any donor. So that was the design of the study.

What we found was that we randomised 224 patients. Now, we had originally enrolled 488 patients at the beginning of the trial, 81% of those patients went into morphologic remission – a CR or CRi – and they could go on and got the intensification. We lost some patients in there because even though they achieved a remission some of them relapsed fairly quickly, some of them had to go off study because of toxicity. So we randomised these 224 MRD negative patients, 112 patients to chemotherapy alone and 112 patients to the blinatumomab plus chemotherapy.

How do you think these results can impact the future treatment of B-lineage ALL?

We think that given these results, the significant improvement that we saw in the overall survival when we added blinatumomab, we think that this should be a new standard of care for these patients. This trial was designed actually as a registration trial from the beginning and the company that makes blinatumomab are planning to submit our data to the regulatory authorities to get it approved for this new indication for the treatment of MRD negative patients. 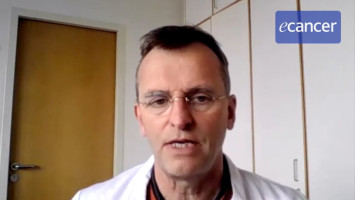