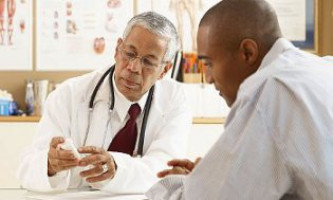 ADT was used to reduce the size of the prostate to make a patient eligible for prostate brachytherapy.

These findings are published in Cancer.

Konstantin Kovtun, MD, a resident at BWH, Anthony D'Amico, MD, PhD, chief of Genitourinary Radiation Oncology at BWH, and colleagues, analysed the medical records of over 7000 men from the Chicago Prostate Cancer Center who had low or favourable-intermediate risk prostate cancer, 20 percent of whom were treated with ADT in order to reduce the size of their prostate gland to make them eligible for brachytherapy.

They found that African-American men who were treated with ADT had a 77 percent higher risk of death when compared to non-African American men, the causes of which were not due to prostate cancer.

"When African-American men were exposed to an average of only four months of hormone therapy, primarily used to make the prostate small enough for brachytherapy, they suffered from higher mortality rates due to causes other than prostate cancer than non-African American men," Kovtun explained. "This leads us to believe that there may be something intrinsic to the biology of African-American men that predisposes them to this increased risk of death and that this deserves further study."

ADT is an antihormone treatment that lowers a man's testosterone level, and been used to reduce the size of the prostate and in turn make the subsequent brachytherapy treatment possible.

This team of BWH researchers is the first to observe the negative effects of ADT in the context of racial differences, specifically comparing African-American men to non-African American men after adjusting for age, comorbidities such as heart disease and established prostate cancer prognostic factors.

"These results show that careful consideration should be taken by physicians when recommending treatment for low or favourable-intermediate prostate cancer, a cancer that very few men die of even without treatment," D'Amico said. "There is no evidence that ADT followed by brachytherapy increases the chance of cure in comparison to other treatments, such an external beam radiation therapy alone, in these men with favourable risk prostate cancer. The subsequent risks of ADT, specifically linked to African-American men, deserve further study."

Future research is indicated to explore the basis for the observation of shortened survival in African-American men following ADT use with the hope of developing effect and personalised treatments for all men with prostate cancer.