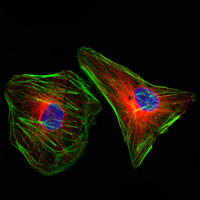 Zap a tumour with radiation to trigger expression of a molecule, then attack that molecule with a drug-loaded nanoparticle.

That's the approach researchers working in mice have taken in a new study, published in Science Translational Medicine, that aims to make delivery of chemotherapy to metastatic tumours more effective.

The researchers say that the radiation-guided nanoparticles may offer a new approach for penetrating the vascular barrier that often thwarts current nanomedicines from reaching metastatic tumours.

To spread to distant organs, cancer cells in the bloodstream latch onto adhesion molecules known as P-selectins in the blood vessel walls.

Yosi Shamay and colleagues further found that unlike normal tissues, many human cancers, including lung, ovarian, breast, and liver, overexpress P-selectin on tumour cells and in surrounding blood vessels.

To exploit this molecule as a therapeutic target, the researchers designed nanoparticle drug carriers composed of fucoidan, a seaweed-derived compound that naturally binds to P-selectin.

In a mouse model of lung cancer and metastatic melanoma and breast tumours, all of which express P-selectin, the nanoparticles selectively delivered chemotherapy drugs to the tumours, improving tumour reduction and overall survival better than did the free form of the drugs or drug-loaded nanoparticles not made of fucoidan.

For tumours that do not normally express P-selectin, Shamay et al. used radiation, which is known to boost P-selectin expression in tissues, to guide the nanoparticles to the tumour site.

In a related Focus, Ranit Kedmi and Dan Peer discuss the promises and challenges of moving the nanotherapy to the clinic.

Radiation-guided nanoparticles may offer a new tool for delivering drugs to almost any tumour, they note, but further development would need to address the double-edged sword of radiation's potential to trigger P-selectin expression that might unintentionally promote cancer spread.