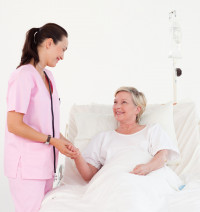 Radiotherapy – after surgery – focused around the part of breast that had contained the tumour has fewer long-term side effects and is just as effective as standard whole breast radiotherapy, according to a Cancer Research UK-funded clinical trial1 presented at the 10th European Breast Cancer Conference (EBCC-10), Amsterdam, The Netherlands.

In the IMPORT LOW trial2 a team of 30 radiotherapy centres led by The Institute of Cancer Research, London, studied more than 2,000 women aged 50 or over who had early breast cancer which was at low risk of coming back.

In the study, women who had already had their tumours removed by breast conserving surgery were separated into three groups.

One had full dose radiotherapy to the whole breast – the current standard treatment.

The second group, after surgery to remove their tumour, had the full dose of radiotherapy to the area the tumour had been in – with a lower dose to rest of the whole breast.

The third group received the full dose to the area where the tumour had been, and were given no radiotherapy to the rest of the breast.

All three groups received 15 separate treatments over three weeks using a simple form of intensity modulated radiotherapy (IMRT), a technique that delivers an even dose of radiation and reduces long term side effects.

Five years after their treatment, only one per cent or less of women in each group had a recurrence of their cancer in their breast.

The researchers hope the trial results will contribute to changes in clinical practice worldwide.

They also expect side effects to continue to be lower for women in the partial breast radiotherapy group after ten years, compared with those given the full dose of radiotherapy to the whole breast.

Dr Charlotte Coles, clinical trial lead and consultant clinical oncologist at Cambridge University Hospital NHS Foundation Trust, said: “We’re really pleased we have demonstrated a very effective radiotherapy approach that also reduces the side effects of treatment. Minimising these long term side effects is essential, as not only do they impact on physical health, but they can also cause psychological distress.”

Professor Judith Bliss, study co-leader, director of the Cancer Research UK-funded clinical trials and statistics unit at The Institute of Cancer Research, London, said: “We hope that these important results will contribute to a change in practice in the very near future. The simple radiotherapy techniques used in this trial can be carried out on standard radiotherapy machines across the UK, so widespread implementation would be relatively straightforward.”

Professor Arnie Purushotham, senior clinical adviser at Cancer Research UK, said: “This could result in a crucial change to how we treat breast cancer. If this changes practice it could prevent many women having lasting effects from their treatment and reduce the discomfort and emotional stress women have from these side effects.”

3. Those who were given the full dose to the area where the tumour had been, and were given no radiotherapy to the rest of the breast.