For breast cancer patients, never too late to quit smoking 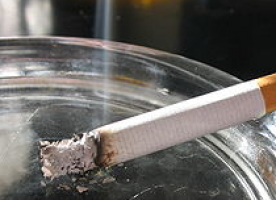 The paper was published in the Journal of Clinical Oncology.

"Our study shows the consequences facing both active and former smokers with a history of breast cancer," said first author Michael Passarelli, PhD, a cancer epidemiologist at the UCSF School of Medicine.

"About one in ten breast cancer survivors smoke after their diagnosis. For them, these results should provide additional motivation to quit."

The findings come from the Collaborative Breast Cancer Study, conducted by the University of Wisconsin, Dartmouth College and Harvard University.

The observational study quantifies among women with breast cancer the long-term benefits of stopping smoking.

The study, which followed participants on average a dozen years after diagnosis, compares the causes of death among four groups:

The 2014 Report of the Surgeon General on the health consequences of smoking suggested that there may be a causal relationship between breast cancer and smoking.

Previous studies have also speculated that the risk of developing breast cancer in smokers might depend on when smoking started and for how long.

There are more than three million breast cancer survivors in the U.S.

Women in the Collaborative Breast Cancer Study were between the ages of 20 and 79, and were diagnosed with localised or invasive breast cancer between 1988 and 2008.

Participants were asked to report on such factors as whether they had smoked at least 100 cigarettes during their lifetime, their age when they started smoking, and the average number of cigarettes they smoked a day.

The authors controlled for several important risk factors that could impact survival, including alcohol consumption and body mass index.

By 2010, a total of 6,778 women died - the leading causes of death were breast cancer and cardiovascular disease.

Active smokers a year before breast cancer diagnosis were more likely to die of breast cancer, respiratory cancer, other respiratory disease, or cardiovascular disease than women who had never smoked.

The highest risks of death as a result of breast cancer were observed among long-term smokers, people who smoked heavily, or former smokers who quit fewer than five years before breast cancer diagnosis.

Approximately one in ten cancer patients continued to smoke following their diagnosis and they were more likely than people who had never smoked and former smokers to die of breast cancer, the researchers said.

Those who quit smoking after diagnosis had lower mortality from breast cancer and respiratory cancer.

"Recent policy statements from leading research and clinical organisations are now urging oncologists to be as aggressive in getting their patients to stop smoking as they are in treating the cancer."

The study did not assess for exposure to second-hand smoke nor did it include hormone receptor status of breast tumours.