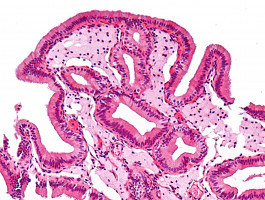 Bile duct cancers are amongst the most aggressive tumour-related diseases and, so far, the medical treatment options available have been limited.

Clinical oncologists at the Comprehensive Cancer Center at the MedUni Vienna and Vienna General Hospital have now demonstrated that the substance nab-paclitaxel, a biochemically modified ingredient that occurs in the bark of the Pacific yew tree, could be highly effective against bile duct cancers.

Nab-paclitaxel could therefore be used in the treatment of bile duct cancers and therefore prolong the lives of patients with the condition.

The mean survival period is around one year. Standard therapy includes surgical removal of the tumour or, if it is inoperable, chemotherapy with gemcitabine and cisplatin.

Once this line of treatment has been exhausted, there have until now been no other standard therapy options available.

The team of oncologists led by Gerald Prager from the University Department of Internal Medicine I at the MedUni Vienna, Vienna General Hospital and the Colorectal Cancer Unit at the Vienna Comprehensive Cancer Center (CCC), has demonstrated initial effectiveness of the nab-paclitaxel substance in the treatment of bile duct carcinoma.

This medication involves the ingredient paclitaxel, which is found in the bark of the Pacific yew tree, and it is linked to a protein molecule in order to make it more tolerated and effective.

This means the body is able to transport it more easily into tumour cells.

Nab-paclitaxel has already recently been approved for the treatment of breast and pancreatic cancer.

Its effectiveness against bile duct cancers has been presented to the world for the first time with this study.

Says Prager: "The primary objective with an aggressive disease such as bile duct cancer is to control the disease while maintaining or improving the patient's quality of life. We want to stabilise the disease and ideally make the condition a chronic one. Initial data confirms that nab-paclitaxel is likely to have a high degree of biological effectiveness with few side effects."

Presentation of initial data at the San Francisco Cancer Congress

Prager presented the initial data at the Gastrointestinal Cancer Symposium in San Francisco.

The congress is one of the largest and most important events to deal with cancers of the digestive tract.

Says Prager: "We are already able to proudly state that our idea is finding acceptance. Our efforts have enabled us to kick off a major study aimed at introducing the substance into routine clinical practice. We will of course be actively involved in this international, multi-centre, prospective, randomised study."