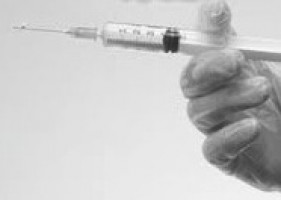 The poster session ‘Melanoma and other skin tumours’, held at ESMO 2014 in Madrid, highlighted the emerging field of intralesional injections for cutaneous melanoma leading to tumour regression not only in the injected lesions, but also in ‘bystander’ lesions suggesting that the strategy is augmenting immune response.

Despite locoregional therapies, such as surgery and radiation, a significant percentage of patients have locally advanced disease at high risk for recurrence, progression and metastasis.

Now a number of new approaches are exploring intralesional injections of oncolytic viral immunotherapy and dyes to eliminate patient symptoms and prevent progression to stage 4 disease.

Earlier, at ASCO 2014 the investigators had shown that median overall survival was 23.3 months for the T-VEC arm compared to 18.9 months in the granulocyte macrophage colony-stimulating factor (GM-CSF) arm (HR 0.79, P=0.051).

Extension treatment was made available to patients who did not have clinically relevant progressive disease or who had experienced a complete response and then developed a new lesion within 12 months from the end of last treatment.

Altogether 31patients were enrolled into the extension trial, including three from the GM-CSF arm and 28 from the T-VEC arm who continued on randomised treatment for up to 12 months.

The adverse events reported were grade 1 or 2 in severity and did not lead to discontinuation.

“We were able to show that in some patients whose disease had returned we could get them back into remission by re challenging them with the agent. We also showed that T-VEC was very tolerable with no additional toxicity burdens for reinjection,” explained Kevin Harrington, study author from the Institute of Cancer Research, London.

In animal models, it has been shown that CVA21 lysed tumour cells induce a secondary systemic host-generated anti-tumour immune response.

Results of the phase 2 study showed that 22 out of 57 of stage IIIC and IV melanoma patients (38.6%) met the primary endpoint of immune-related progression free survival (irPFS) at six months.

The secondary endpoint of objective response rate (complete response partial response, according to irRECIST 1.1) was 28.1%.

Finally, poster 1120P provided the latest analysis of a phase 2 study evaluating intralesional injection of PV-10, a 10% solution of the dye Rose Bengal, in 80 patients with stage IIIB-IV melanoma².

The rationale for PV-10 is that the agent has a local chemo ablative effect where it enters lysosomes causing local necrosis, and then in some patients a systemic effect believed to be immunologically mediated.

The abstract furthermore showed marked differences in progression free survival according to number of lesions injected.

Such data he added, suggests PV-10 will deliver significant progression free survival effects in the phase 3 study, due to start Q4 2014.

“The abstract also shows us that we’re likely to get the highest responses when all lesions are injected.”