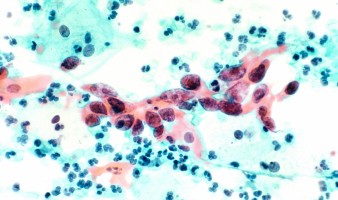 A drug which targets a key gene fault could halt an aggressive womb cancer and shrink tumours, according to research published in the British Journal of Cancer.

The scientists, from the Division of Gynaecologic Oncology at Yale School of Medicine funded by the National Institutes of Health, showed that the drug afatinib not only killed off uterine serous cancer cells after stopping their growth but also caused tumours to shrink.

The drug, a type of personalised medicine, attacks faults in the HER2 gene which lie at the heart of the cancer cells.

This stops the disease in its tracks.

Drugs which target HER2 are already used to treat breast cancer.

Uterine serous carcinoma is a fast-growing type of womb cancer.

It is more likely than other womb cancers to come back after treatment, returning in one in two patients even if it is caught early.

Although the cancer causes less than one in 10 womb cancers, it accounts for 40 per cent of all deaths from womb cancer – which is around 800 deaths every year in the UK.

The researchers looked at uterine serous carcinoma cell lines with normal and increased levels of the HER2 protein to see how afatinib affected the cancer.

They found that the drug had a big impact on cancer cells with this gene fault, and could stop them growing and kill them.

They also found that the drug shrank the size of uterine serous tumours when given to mice.

Afatinib works by targeting receptors that respond to growth signals.

Cancers with high levels of the HER2 protein have too many of these receptors, allowing them to grow out of control.

The drug is an example of personalised or tailored treatment, which works by specifically targeting the faulty genes and molecules in an individual’s cancer.

Afatinib is being tested in clinical trials for a number of cancers including bowel cancer and certain types of lung and breast cancer.

Lead author, Dr Carlton Schwab from the Division of Gynaecologic Oncology at the Yale School of Medicine, said: “Our research uses the vast amount of genetic information now available to find ways to shake the foundations of cancer and stop the disease progressing.

“We have shown similar results to early data of afatinib in non small cell lung cancer, which ultimately led to clinical trials and a shift in the way some of these cancers are treated. There could be real possibilities to make a difference for patients, and this study has laid the foundations for the development of clinical trials testing the drug in women whose cancers have this HER2 gene fault and don’t respond to chemotherapy.”

Nell Barrie, senior science information manager at Cancer Research UK, said: “Targeted treatments like afatinib offer an opportunity to home in on the faults at the heart of each cancer. The findings of this research still need to be proven in people, but this research suggests that afatinib could be an effective treatment in treating this rare but aggressive type of cancer.

“Cancer Research UK has invested heavily in the research and infrastructure to help deliver more personalised treatments for cancer and continues to do so. We believe that personalised approaches will one day enable doctors to treat people based on the genetic fingerprint of their tumour.”