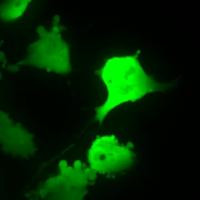 A new study from the research group of Dr John Lewis at the University of Alberta (Edmonton, AB) and the Lawson Health Research Institute (London, ON) has confirmed that "invadopodia" play a key role in the spread of cancer.

The study, published in Cell Reports, shows preventing these tentacle-like structures from forming can stop the spread of cancer entirely.

Roughly 2 in 5 Canadians will develop cancer in their lifetime, and one in four of them will die of the disease.

In 2014, it's estimated that nine Canadians will die of cancer every hour.

Thanks to advances in medical research and care, cancer can often be treated with high success if detected early.

However, after it spreads, cancer becomes much more difficult to treat.

To spread, or "metastasise," cancer cells must enter the blood stream or lymph system, travel through its channels, and then exit to another area or organ in the body.

This final exit is the least understood part of the metastatic process.

Previous research has shown cancer cells are capable of producing "invadopodia," a type of extension that cells use to probe and change their environment.

However, their significance in the escape of cancer cells from the bloodstream has been unclear.

In the study, the scientists injected fluorescent cancer cells into the bloodstream of test models, and then captured the fate of these cells using high-resolution time-lapse imaging.

Results confirmed the cancer cells formed invadopodia to reach out of the bloodstream and into the tissue of the surrounding organs – they essentially formed "tentacles" that enabled the tumour cell to enter the organ.

However, through genetic modification or drug treatment, the scientists were able to block the factors needed for invadopodia to form.

This effectively stopped all attempts for the cancer to spread.

The study findings confirm invadopodia play a key role in the spread of cancer.

Most importantly, they suggest an important new target for therapy.

If a drug can be developed to prevent invadopodia from forming, it could potentially stop the spread of cancer.

"Just as a person boards an airplane and travels to their destination, tumour cells enter the bloodstream and travel to distant organs like the liver, lungs, or brain. The hard part is getting past border control and airport security, or the vessels, when they arrive. We knew that cancer cells were somehow able to get past these barriers and spread into the organs. Now, for the first time, we know how."

"Metastasis is the deadliest aspect of cancer, responsible for some 90% of cancer deaths," says Dr John Lewis, the Frank and Carla Sojonky Chair in Prostate Cancer Research at the University of Alberta.

"These new insights give us both a new approach and a clinical window of opportunity to reduce or block the spread of cancer".