Speeding up cancer diagnosis during surgery 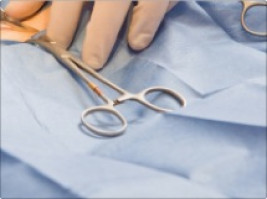 Experts at The University of Nottingham have developed a highly accurate prototype technique which can produce a detailed ‘spectroscopic fingerprint’ of each tissue layer removed during surgery.

This technique — which can produce detailed maps of the tissue rich in information at the molecular level — has the potential to speed up and improve the diagnosis of cancer tissue during the operation as well as reduce unnecessary surgery.

Tissue-conserving cancer surgery is a highly skilled procedure which involves time-consuming tissue preparation to detect the margins of cancerous tissue. The goal is to remove as much of the tumour as possible while sparing healthy tissue.

With funding from the National Institute for Health Research (NIHR), experts at The University of Nottingham have developed a highly accurate prototype technique which can produce a detailed ‘spectroscopic fingerprint’ of each tissue layer removed during surgery.

This technique — which can produce detailed maps of the tissue rich in information at the molecular level — has the potential to speed up and improve the diagnosis of cancer tissue during the operation as well as reduce unnecessary surgery.

The research has been published in the prestigious journal Proceedings of the National Academy of Sciences and the team, led by Dr Ioan Notingher in the School of Physics and Astronomy, are now looking to build an optimised instrument that can be tested in the clinic.

Dr Notingher said: “By refining our prototype instrument to make it more user-friendly and even faster to use. Diagnosis of each tissue layer could be obtained in just a few minutes — rather than hours. Such developments have the potential to revolutionise the surgical treatment of cancers. This technology will provide a fast and objective way for surgeons to make sure that all the cancer cells have been removed whilst at the same time preserving as much healthy tissue as possible.”

The challenges of tissue-conserving surgery

Typically, skin conserving surgery involves cutting away one thin layer of tissue after another and each layer after another is carefully examined to make sure that all the cancer has been removed. This lengthy process is stopped when only health tissue is left. Successful removal of all cancer cells is the key to achieving lower rates of the cancer returning but there is always a balance to be struck between making sure all the cancer is removed and preserving as much healthy tissue as possible in order to reduce scarring and disfigurement.

Dr Notingher said: “The real challenge is to know where the cancer starts and ends when looking at it during an operation so that the surgeon knows when to stop cutting. Our technique can also diagnose the presence or absence of skin cancer in thick chunks of skin tissue, making it unnecessary to cut the tissue up further into thin slices.”

Scientific research in this field started around two decades ago and only now are scientists starting to publish the results of their work. The use of lasers and high-sensitivity light detection technologies allows faster and more sensitive imaging of tissues and discrimination of tumours.

A huge step forward for the patient

One particular technique, known as Mohs surgery — microscopically controlled surgery — is used for the treatment of difficult cases of a type of skin cancer called basal cell carcinoma (BCC). BCC is the commonest cancer in humans with more than 60,000 new patients diagnosed each year in the UK.

The incidence of BCC continues to increase each year because we have an ageing population who have had a lot of sun exposure in the past. Mohs surgery provides the highest cure rates for BCC, but the procedure takes a lot of time because each new tissue layer has to be frozen and examined during the operation.

Typically, this takes around 1-2 hours per layer so an operation can take as long as five to seven hours in total.

So, from a patient’s perspective, there is a need to reduce the Mohs surgery time by developing faster and objective ways of seeing whether the cancer has been completely removed during a shorter operation under a single local anaesthetic.

Dr Notingher’s technique uses an integrated optical technique based on auto-fluorescence (natural fluorescence from the tissue) and Raman spectroscopy (a highly sensitive technique using lasers to identify the molecules in a tissue sample).

Dr Notingher said: “Our technique does not rely on time consuming and laborious steps of tissue fixation, staining, labelling or sectioning. The beauty is that it can be automated and very objective.

To make this new technique suitable for use in the middle of an operation such as Mohs surgery for BCC, we have combined tissue auto-fluorescence, which is quick and good at picking out all the cancer cells (but not at excluding normal tissue) as a first step, followed by Raman scattering, a rather slow but good at separating normal from cancer tissue. By combining these two methods into one technique high accuracy diagnosis of BCC can be obtained in only a few minutes.”

Professor Hywel Williams, one of the dermatologists working in the team and Director of the Centre for Evidence Based Dermatology (CEBD) at The University of Nottingham, said:  “I am now convinced that this technique is reliable and potentially fast enough to replace conventional methods that determine tumour clearance for basal cell carcinoma removed during Mohs micrographic surgery — an advance that will increase the accessibility of Mohs to many more people across the world.”

This NIHR-funded research was carried out under its Invention for Innovation (i4i) Programme in collaboration with Nottingham University Hospital National Health Service (NHS) Trust, Royal Holloway University, and the CEBD.