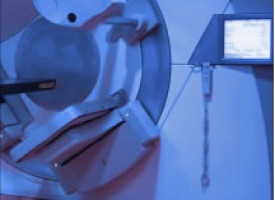 A new way of analysing data acquired in MR imaging appears to be able to identify whether or not tumors are responding to anti-angiogenesis therapy, information that can help physicians determine the most appropriate treatments and discontinue ones that are ineffective.

In their report receiving online publication in Nature Medicine, investigators from the Martinos Center for Biomedical Imaging at Massachusetts General Hospital (MGH), describe how their technique, called vessel architectural imaging (VAI), was able to identify changes in brain tumour blood vessels within days of the initiation of anti-angiogenesis therapy.

"Until now the only ways of obtaining similar data on the blood vessels in patients' tumors were either taking a biopsy, which is a surgical procedure that can harm the patients and often cannot be repeated, or PET scanning, which provides limited information and exposes patients to a dose of radiation," says Kyrre Emblem, PhD, of the Martinos Center, lead and corresponding author of the report.

"VAI can acquire all of this information in a single MR exam that takes less than two minutes and can be safely repeated many times."

Previous studies in animals and in human patients have shown that the ability of anti-angiogenesis drugs to improve survival in cancer therapy stems from their ability to "normalise" the abnormal, leaky blood vessels that usually develop in a tumor, improving the perfusion of blood throughout a tumour and the effectiveness of chemotherapy and radiation.

In the deadly brain tumour glioblastoma, MGH investigators found that anti-angiogenesis treatment alone significantly extends the survival of some patients by reducing edema, the swelling of brain tissue.

In the current report, the MGH team uses VAI to investigate how these drugs produce their effects and which patients benefit.

Advanced MR techniques developed in recent years can determine factors like the size, radius and capacity of blood vessels. VAI combines information from two types of advanced MR images and analyzes them in a way that distinguishes among small arteries, veins and capillaries; determines the radius of these vessels and shows how much oxygen is being delivered to tissues.

The MGH team used VAI to analyze MR data acquired in a phase 2 clinical trial – led by Tracy Batchelor, MD, director of Pappas Center for Neuro-Oncology at MGH and a co-author of the current paper – of the anti-angiogenesis drug cediranib in patients with recurrent glioblastoma.

The images had been taken before treatment started and then 1, 28, 56, and 112 days after it was initiated.

In some patients, VAI identified changes reflecting vascular normalization within the tumors – particularly changes in the shape of blood vessels – after 28 days of cediranib therapy and sometimes as early as the next day.

Of the 30 patients whose data was analysed, VAI indicated that 10 were true responders to cediranib, whereas 12 who had a worsening of disease were characterised as non-responders. Data from the remaining 8 patients suggested stabilisation of their tumours. Responding patients ended up surviving six months longer than non-responders, a significant difference for patients with an expected survival of less than two years, Emblem notes. He adds that quickly identifying those whose tumours don't respond would allow discontinuation of the ineffective therapy and exploration of other options.

Gregory Sorensen, MD, senior author of the Nature Medicine report, explains, "One of the biggest problems in cancer today is that we do not know who will benefit from a particular drug. Since only about half the patients who receive a typical anti-cancer drug benefit and the others just suffer side effects, knowing whether or not a patient's tumour is responding to a drug can bring us one step closer to truly personalised medicine – tailoring therapies to the patients who will benefit and not wasting time and resources on treatments that will be ineffective." Formerly with the Martinos Center, Sorensen is now with Siemens Healthcare.

Study co-author Rakesh Jain, PhD, director of the Steele Laboratory in the MGH Department of Radiation Oncology, adds, "This is the most compelling evidence yet of vascular normalisation with anti-angiogenic therapy in cancer patients and how this concept can be used to select patients likely to benefit from these therapies."

Lead author Emblem notes that VAI may help further improve understanding of how abnormal tumor blood vessels change during anti-angiogenesis treatment and could be useful in the treatment of other types of cancer and in vascular conditions like stroke. He and his colleagues are also exploring whether VAI can identify which glioblastoma patients are likely to respond to anti-angiogenesis drugs even before therapy is initiated, potentially eliminating treatment destined to be ineffective. A postdoctoral research fellow at the Martinos Center at the time of the study, Emblem is now a principal investigator at Oslo University Hospital in Norway and maintains an affiliation with the Martinos Center.