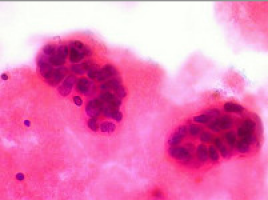 Ewing's sarcoma is a bone cancer commonly diagnosed in about 250 U.S. teenagers per year. If early chemotherapy is effective, improvement can be durable.

But for children and teens who respond poorly to a first attempt at chemotherapy or if the disease spreads, long-term survival can be less than 10 percent.

A University of Colorado Cancer Center study published the journal Molecular Cancer Research shows an important difference that may explain why some respond and some don't: the existence of high levels of the protein EYA3.

"First, levels of EYA3 could be a tool in offering an accurate prognosis and choosing how aggressively to treat Ewing's Sarcoma, and second we hope that by lowering levels of EYA3, we could help increase the effectiveness of existing therapies for Ewing's sarcoma," says Tyler Robin, PhD, first author of the recent paper.

Researchers recently defined the role of EYA3 as a DNA repair molecule and Tyler showed that EYA3 has a similar repair role in Ewing's sarcoma – high levels of EYA3 help the tissue survive during and recover after treatment with chemotherapy.

Importantly, when Robin knocked down EYA3 in Ewing's sarcoma cells, they became sensitized to chemotherapy.

"The genetic mutation that creates Ewing's sarcoma also leads to high levels of EYA3," says Heide Ford, PhD, investigator at the CU Cancer Center and associate professor in the CU School of Medicine department of ob/gyn, and the paper's senior author.

The mutation Ford refers to and that creates Ewing's sarcoma is the fusion of a gene from chromosome 22 to a gene in chromosome 11. Known as a EWS/FLI translocation, this mutation turns off a cell's ability to make another, intermediate step known as miR-708 – a molecule that helps to decide what parts of the genome do and don't get read and manufactured into proteins. In healthy tissue, miR-708 turns off the production of EYA3; in Ewing's sarcoma, miR-708 is down and so EYA3 is up.

"Our next step is to test small molecule inhibitors against EYA3 to determine which inhibitors best sensitize Ewing's sarcomas to chemotherapy," says Ford.

Robin and Ford hope that recognizing EYA3 levels, reducing these levels directly, or intervening in the steps that lead to its over-production will help predict outcomes, make decisions about existing treatments, and eventually lead to new treatments for Ewing's sarcoma.