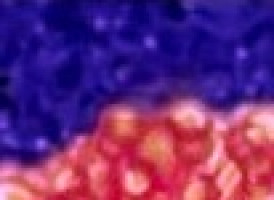 Maintenance therapy with interleukin-2 and 13-cis retinoic acid may be an inexpensive method for increasing survival in patients with a variety of stage 4 cancers, according to data reported at the AACR Annual Meeting 2012, held March 31 - April 4.

Francesco Recchia, M.D., director of oncology at the Civilian Hospital in Avezzano, Italy, started evaluating the maintenance therapy in patients with advanced disease in 1995 after one patient with metastatic melanoma did not tolerate the usual 18 M UI/m2 high-dose interleukin-2 (IL-2) therapy.

“The patient was treated with lower doses, and he had a wonderful, long-lasting response,” he said.

After this observation, Recchia conducted several other studies of IL-2 with or without retinoic acid (RA). “I was encouraged by these preliminary results, and therefore, I conducted a phase II study of this drug combination in 80 patients who had obtained a clinical benefit from chemotherapy. The results were very interesting.”

The researchers evaluated 500 patients with different tumor types, but all with stage 4 disease. After their normal cancer treatment, patients were assigned to self-administered subcutaneous IL-2 (1.8×106 IU) and oral RA (0.5 mg/kg) five days a week for two consecutive cycles of three weeks, followed by a one-week rest, for one year. After a median follow-up of 60 months, researchers reported increased numbers of natural “killer” cells — immune cells with antitumor functions — and a decrease of vascular endothelial growth factor. The 15-year disease-free survival and overall survival rates were 32.6 percent and 36.8 percent, respectively.

“These studies had such good and unexpected results that I thought it would not be ethical to conduct a randomized study without this immunotherapy regimen,” Recchia said. “All types of cancer treated had a benefit from this immunotherapy regimen: ovarian cancer, non-small cell lung cancer, cardiac metastases of sarcoma, colorectal cancer, gastric cancer, renal cell carcinoma, melanoma, head and neck cancer, breast cancer, pancreatic cancer and recurrent ovarian cancer.”

Despite the limitations of different cancer populations, the researchers reported a marked improvement in the five-year overall survival rate for the most commonly treated metastatic cancers compared with National Cancer Institute Surveillance Epidemiology and End Results data: breast (42.7 percent vs. 23.3 percent), lung (26.4 percent vs. 3.6 percent), colorectal (43.6 percent vs. 11.7 percent) and renal (23 percent vs. 11 percent).

Immunotherapy with IL-2 has fallen out of favor in place of newer monoclonal antibodies, according to Recchia. Although his results appear promising, a blinded, controlled, randomized trial would be needed before clinicians could begin using this maintenance regimen.