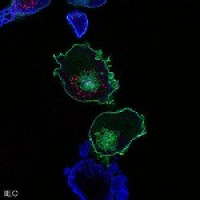 Older women with breast cancer tend to suffer more from bone metastases and osteoporosis as a result of resistances that they develop to hormone therapy.

In the international BOLERO-2 study, which involved experts from the Comprehensive Cancer Centre at the MedUni Vienna and in particular Michael Gnant from the University Department of Surgery, the effectiveness of a therapy has now been proven that counteracts these resistances: the combination of two cancer medications – everolimus and exemestane – significantly improves bone strength and reduces the risk of bony metastases.

“These results are able to set a new standard of treatment for women with advanced breast cancer resistant to hormone therapies,” said Gnant at the EBCC-8 European Breast Cancer Conference held in Vienna.

During this hormone therapy, however, many patients with advanced breast cancer who already have metastases in other parts of their body develop resistance to the treatment and are no longer able to benefit from it. The therapy also has a deleterious effect on bone health, increasing the risk of osteoporosis. This risk is also reduced, says Gnant, by the simultaneous administration of everolimus.

“This indicates a slower bone turnover process and improved bone density and bone health. Everolimus appears to make it harder for metastases to form and grow in the bones, thereby breaking through the resistance,” says Gnant, who is regarded internationally as the leading expert in breast cancer research in association with bone health. The plan in future is therefore to offer all women with hormone-resistant, advanced cancer a new option of also taking everolimus (an mTOR inhibitor with numerous functions involved in regulating cell growth).

“The interesting question that we are now hoping to focus on is what effect everolimus will have on women with early-stage breast cancer, in whom bone health is even more important. Work is currently underway on the design of clinical studies that will aim to investigate this," says the scientist from the MedUni Vienna.