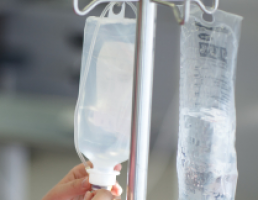 The largest study ever on the effect of genetic variability on the toxicity of chemotherapy in breast cancer shows that it is possible to predict which patients are most likely to suffer serious side effects, a researcher will tell the 8th European Breast Cancer Conference (EBCC-8).

Dr. Christof Vulsteke, from the Catholic University of Leuven, Belgium, will explain how his team’s research is an important step towards achieving a personalised chemotherapy regime for each patient.

The researchers examined germline DNA from blood samples from 1089 breast cancer patients who were treated between 2000 and 2010 with three commonly used chemotherapy drugs (fluorouracil, epirubicin and cyclophosphamide).

For each patient, the variability in the genes that are important for metabolising these three chemotherapeutic drugs was compared with the side effects experienced.

“We found that genetic variation in one gene was highly correlated with chemotherapy side effects,” says Dr. Vulsteke. “Investigating this gene before starting chemotherapy would allow us to support the patient with either growth factors to increase the patient’s immunity, or dose modifications, or a different chemotherapy regimen better adapted to the patient, or a combination of these.”

Currently, most patients receive the standard treatment; however, the side effects they suffer can be very different, ranging from severe to very minimal reactions. Making adjustments to treatment would have a major impact on both the physical and psychological well-being of patients, and on the financial burden to society posed by chemotherapy side effects, for example, hospitalisation.

The most important side effects of chemotherapy are mainly caused by immune system depression, which can result in potentially life threatening infections. Even though patients may take every precaution to avoid contamination, the vast majority of these infections are caused by naturally occurring microorganisms in the patient’s own gastrointestinal tract. Other serious side effects noted in patients receiving chemotherapy are bleeding, severe infection of the mouth mucosa, severe bowel inflammation, nausea, and vomiting with dehydration.

“Our research has brought us one step closer towards prescribing personalised chemotherapy treatment with a minimum of side effects,” says Dr. Vulsteke.

The researchers now intend to look for data from other European countries in order to further validate their results. They will also continue to follow up on their own patients; currently the patients are followed up, on average, for five years.

“In 2016 we will have a very accurate assessment of the impact of genetic variation on breast cancer survival and recurrence,” says Dr. Vulsteke.  “Our future research will focus on other genes involved in processing the chemotherapeutic drugs that we studied, and we will also enlarge the scope of the research by including other chemotherapeutic drugs where we can hypothesise that genetic variability plays an equally important role,” he will conclude.

Professor David Cameron, from the University of Edinburgh (Edinburgh, UK), and Chair of EBCC-8 said: “In the search for ways to “personalise” anti-cancer treatments, much of the focus has been on matching the treatment to the cancer.

However it should not be forgotten that we also need to ensure the treatment is “matched” to the patient, and this study is an important step in this direction, potentially allowing us to ensure that standard chemotherapy can be delivered with either less severe toxicity, or perhaps to have the dose adjusted to give maximal benefit. Further studies will be needed to demonstrate that improvements in patient survival can be achieved by tailoring the actual doses along the lines that this study suggests could be possible.”