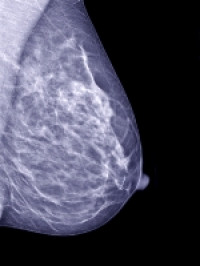 Women aged 50 and over with breasts that have a high percentage of dense tissue are at greater risk of their breast cancer recurring, according to Swedish research presented at the eighth European Breast Cancer Conference (EBCC-8) in Vienna.

Dr Louise Eriksson and her colleagues from the Karolinska Institutet (Stockholm, Sweden) found that women with denser breasts had nearly double the risk of their cancer recurring, either in the same breast or in the surrounding lymph nodes, than women with less dense breasts.

They warn that doctors should take breast density into account when making decisions about treatment and follow-up for these women.

When a woman has a mammogram, the resulting scan gives an image of the breast that shows areas of white and black.

The white areas represent the dense tissue, made up of the epithelium and stroma.The black areas are made up of fatty tissue, which is not dense.

The percentage density (PD) of the breast is calculated by dividing the dense area by the area of the whole breast (dense and non-dense tissue included).

Breast density varies from woman to woman, and it also decreases with age. Dr Eriksson explained: “Density can vary greatly, even between postmenopausal women. In the group of women I studied, those with the lowest percentage density had breasts that were less than one percent dense, whereas those with highest PD had 75-80% dense breasts.

The mean average PD was 18%. However, density does decrease with age. Studies have shown a decrease by approximately two percent per year. The largest decrease is seen at menopause when PD decreases by approximately 10%.”

The researchers studied the mammograms and outcomes for 1,774 post-menopausal women who were aged 50-74 and who were part of a larger study of all women with breast cancer diagnosed between 1993-1995 in Sweden.

“We found that if you have a PD at diagnosis of 25% or more, you have an almost two-fold increased risk of local recurrence in the breast and surrounding lymph nodes than women with a PD of less than 25%. However, density does not increase the risk of distant metastasis and has no effect on survival.

We also see that although mammographic density is one of the strongest risk factors for breast cancer it doesn’t seem to influence tumour development in any specific way; for instance, it isn’t more associated with oestrogen receptor positive tumours than oestrogen receptor negative tumours, but seems to act as a general stimulator of tumour development,” said Dr Eriksson, who is a PhD student at the Karolinska, as well as a physician at the Stockholm South General Hospital.

“Our study shows that breast density before or at diagnosis should be taken into account even after diagnosis, for instance, when deciding on adjuvant treatment and follow-up routines; perhaps women with dense breasts should be followed more frequently or for a longer period of time in order to quickly spot any local recurrence.

“As far as screening programmes are concerned, it is already known that breast density is a risk factor for the occurrence of breast cancer and that it decreases the sensitivity of mammograms. Our study confirms the importance of taking breast density into account in the screening setting.”

Until now, little was known about the association between density, tumour characteristics and prognosis once cancer had occurred, and results were conflicting. This study is important because of its size and detailed information on each woman. “This is one of the largest studies to date studying mammographic density, tumour characteristics, and prognosis, including almost 50% of all Swedish breast cancer cases diagnosed 1993-1995,” said Dr Eriksson.

Cancer researchers do not know why breast density is a risk factor for breast cancer. “It could simply be due to higher density being associated with more cells, which means that more cells are at risk of developing cancer,” she said. “Another hypothesis is that it is the relationship between mammographic density and the stroma (which has been shown to be the main compound of mammographic density) that is central to the increase in risk.

"There is no leading hypothesis on why an increased amount of stroma would increase breast cancer risk, but it is known that the interaction between the epithelial cells and the stroma is crucial to the development of breast cancer. Based on the results from our study, we propose that mammographic density creates a beneficial environment for epithelial cells to transform into cancer cells; much like fertile soil giving a planted seed the needed nutrients to grow and develop.”

Professor David Cameron, from the University of Edinburgh (Edinburgh, UK), and chair of EBCC-8 said: “This study raises questions about how and why the appearance of normal breast tissue on a mammogram could influence the chances of a local recurrence of breast cancer.

It is, therefore, more thought-provoking than practice-changing, since it is not clear what a patient, or her physician, should do if the mammogram shows a higher density of the normal breast tissue. A number of factors are known that influence mammographic breast density, but more research is needed to know which of these, if any, is responsible for this important observation.”