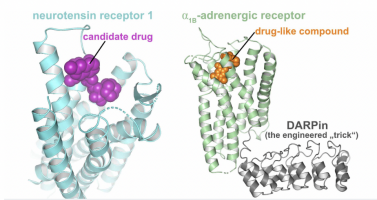 Researchers at the University of Zurich (UZH) have determined several three-dimensional (3D) structures —“the molecular shapes”— of the medically important membrane proteins known as neurotensin receptor 1 and α1B-adrenergic receptor. To achieve this result, the researchers have established a new protein engineering approach that facilitated the determination of the 3D structures. The molecular details of the interactions between the membrane proteins and presently available compounds, including an anticancer candidate drug, now fuel hope for developing better therapeutics to treat certain cancers and neurological and cardiovascular diseases.

The neurotensin receptor 1 is a protein embedded in the membrane outlining our cells. When this receptor interacts with a molecule called neurotensin in the cell exterior, it gets activated (“switched on”) and relays signals to the cell interior that help regulate vital functions of the central nervous system and the gastrointestinal tract. However, excessive activation and signalling of this receptor can drive tumour progression and metastasis in many cancers, such as the highly lethal lung and pancreatic carcinomas. The outcome is a poor prognosis for patients.

Therapeutic drugs acting on the neurotensin receptor 1 could help treat Parkinson’s disease, pain, psychostimulant addiction, and certain cancers. Unfortunately, substantial efforts have not yet translated into approved drugs despite promising pre-clinical studies. An underlying reason is that drug discovery and development have been hampered by the lack of detailed knowledge on how presently available compounds interact with this receptor, precluding their optimization.

To help overcome this limitation, a team led by Prof. Andreas Plückthun at the Department of Biochemistry UZH has determined several high-resolution 3D structures of the neurotensin receptor 1 in complex with presently available compounds, including a candidate drug (called Meclinertant) for the treatment of lung cancer. In addition, a structure of the receptor in the absence of any interacting compound has also been determined.

Firstly, the structures reveal the interactions between the compounds and the receptor at the molecular level. Secondly, they also reveal the structural changes occurring in the receptor due to such interactions. Finally, the team was able to understand how the structural changes likely regulate the receptor’s activity. “Notably, our findings can now serve as a solid basis for developing optimized and more effective compounds to switch on or switch off this receptor," say Mattia Deluigi, Alexander Klipp, and Christoph Klenk, the study's three first authors.

The UZH team led by Prof. Andreas Plückthun, in collaboration with Daniel Scott’s group at the Florey Institute of Neuroscience and Mental Health in Melbourne, also worked on another medically important membrane protein: the α1B-adrenergic receptor (or α1B-adrenoceptor). α-adrenergic receptors are “switched on” by adrenaline and noradrenaline, and regulate functions of considerable clinical relevance in our cardiovascular and nervous systems. Therapeutic drugs acting on α-adrenergic receptors could help treat neuropsychiatric disorders, pain, hypertension, and hyperinflammation. However, currently available drugs have limited therapeutic benefits due to their unselective, promiscuous interaction with numerous receptors, which causes side effects.

To help overcome this drawback, the UZH scientists have determined the 3D structure of the α1B-adrenergic receptor in complex with a compound highly similar to some antihypertensive drugs known as α-blockers. “Together with pharmacological experiments, our structural study reveals which receptor amino acids are key for selective interactions with distinct compounds,” explains Mattia Deluigi, the study’s first author.

These new insights should help increase the selectivity of future drugs, drastically reducing side effects. Remarkably, this new knowledge is of broad relevance because the uncovered key amino acids for selectivity are relevant to numerous receptors. Even medicines primarily targeting other receptors (such as dopamine receptors in the brain) can interact with the α-adrenergic ones, causing detrimental effects. Consequently, the new knowledge may now help improve widely prescribed antidepressants and antipsychotic drugs.

The protein engineering approach that has enabled the determination of all these structures is based on a protein scaffold developed in the Plückthun lab, the DARPin (Designed Ankyrin Repeat Protein) scaffold, which was genetically fused to the receptors of interest and facilitated their crystallization and subsequent structure determination. “This engineering approach has been beneficial for various studies — some of which will be published soon — and holds the potential to enable structure determination of further challenging targets,” concludes Prof. Andreas Plückthun.