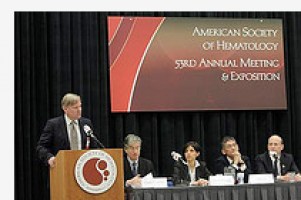 Results from a Phase III clinical trial of monoclonal antibody gemtuzumab ozogamicin (GO) find that the investigational therapy may be a promising option when used in relatively low, frequently repeated doses in conjunction with standard chemotherapy to treat older adults with acute myeloid leukemia (AML).

Chemotherapy has long been the standard of care for induction in patients with AML, an aggressive leukemia that can be fatal within weeks to months of diagnosis without proper treatment. However, with the recent development of targeted therapies, additional research has focused on improving patient outcomes while reducing toxicity associated with conventional chemotherapy regimens. Monoclonal antibodies, or MABs, attach to the cancer cell surface and, when conjugated to a toxin, release the toxin into the cell. MABs are a relatively new type of targeted therapy and are considered an enhancement to chemotherapy that allows treatment to target specific cells while reducing the toxicity to healthy cells. Because GO binds to CD33, an antigen present on AML cells, but not to normal hematopoietic stem cells, it has been the focus of recent research because of its ability to be directed specifically to AML cells.

The treatment protocol had some toxicity, as the rate of fatal adverse events possibly attributable to treatment was 6.7 percent in the DA group and 8.7 percent in the DAGO group. Prolonged grade 3 or greater thrombocytopenia was observed in 19 DAGO patients, and three episodes of veno-occlusive disease or sinusoidal obstructive syndrome (liver vein blockages) were observed in the DAGO arm, two noted as fatal.  There were no differences between the arms in the incidence of severe sepsis or in the rate of intensive care unit admission during the course of therapy.

“Research has demonstrated that GO has very potent anti-cancer properties, and with this study we have identified a dosing regimen that gives patients the therapeutic benefit without some of the toxicities previously reported at higher doses,” said lead author Sylvie Castaigne, MD, Professor in the Department of Hematology at Hôpital de Versailles in Versailles, France. “Specialists treating AML have not been offered a new therapeutic option for several decades, and with this research we are encouraged that GO may be able to deliver better overall outcomes for these AML patients with limited alternatives.”