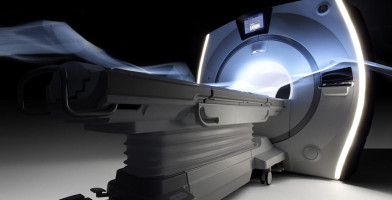 In recent research, a group led by Prof Zhang Xin at the High Magnetic Field Laboratory, Hefei Institutes of Physical Science combined the 9.4 T static magnetic field (SMF) with a commonly used anti-cancer drug imatinib mesylate on gastrointestinal stromal tumour (GIST) bearing mice, and found that the 9.4 T SMF not only enhanced the anti-tumour effect of imatinib, but also reduced the drug side effects on tissues and organs.

This work was published in European Journal of Nuclear Medicine and Molecular Imaging.

SMF is the core part of magnetic resonance imaging (MRI) and is essential to improve MRI image resolution.

7 T MRI has been approved by the Food and Drug Administration (FDA) for clinical diagnosis and the 9.4 T MRI has been initially tested on healthy human volunteers.

However, since safety issues are a prerequisite for the application of high field MRI, the future application of 9.4 T MRI will benefit greatly from experiments with animal disease models.

On the other hand, as the mainstream of anti-cancer treatment, the long-term use of targeted anti-cancer drugs often cause serious side effects and drug resistance, which greatly impair the clinical outcomes and patient life quality.

They also evaluated the treatment potentials of SMF alone, or in combination with imatinib mesylate on tumour growth, side effects and mice mental state.

The results showed that the 9.4 T SMF treatment for 200 h had good biosafety when it inhibited tumour growth by 62.88%, while combined with 20 mg/kg imatinib mesylate resulted in 92.75% tumour suppression.

This was close to the anti-tumour effect of high dose (80 mg/kg) imatinib, while it caused severe side effects, including significant body weight loss, abnormal liver function and depression in mice.

These results showed that 9.4 T static magnetic field not only had anti-tumour potentials on its own, but also could enhance the drug efficacy and reduce the side effects of imatinib mesylate, which might have great clinical potentials in future applications.