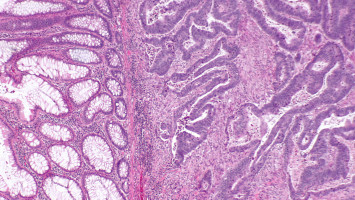 Results of a study led by VHIO investigators and published in Nature Medicine, have unmasked mutations in the RNF43 gene as predictive biomarkers of response to treatment with anti-BRAF/EGFR combinatory therapy in patients with microsatellite stable BRAF V600E metastatic colorectal cancer (MSS mCRC).

Mutations in BRAFV600E occur in around 10% of mCRC, and while relatively rare, they associate with a poor prognosis.

In 2019, findings from the phase III BEACON trial, co-led by VHIO’s Director Josep Tabernero, rang in a new standard of care with the doublet combination of BRAF (encorafenib) and EGFR (cetuximab) inhibitors in patients with previously treated BRAF V600E-mutated mCRC.

“While this combinatory therapy can significantly improve outcomes in some of these patients, others do not show benefit. Up until now, the underlying genetic determinants of efficacy have not been described. We therefore sought to determine which genes were enriched for somatic mutations in responder and non-responder groups,” says Elena Élez, a senior clinical investigator of VHIO’s Gastrointestinal and Endocrine Tumours Group, and a corresponding author of this present study alongside Rodrigo A Toledo, a translational investigator of the same group.

To confirm the study findings from both cohorts treated with anti-BRAF/EGFR, the investigators assessed data from 68 additional patients who had received other treatments such as chemotherapy plus antiangiogenic agents -without anti-BRAF therapy- at the four participating hospitals.

“We performed extensive genomic analysis of over 20,000 genes. In total, we analysed data from 166 patients which represents a significant number considering the rarity of this tumour subtype that accounts for around ten per cent of all colorectal cancers,” observes Rodrigo A Toledo, co-corresponding author of this study and a Translational Investigator at VHIO.

The genomic analysis of responders versus non-responders showed that RNF43 mutations, identified in 29% of BRAF V600E MSS mCRC ‘cold’ tumours, strongly associated with clinical response to anti-BRAF/EGFR-based combinations in these patients.

Results show that those patients presenting these mutations responded better than those who did not, with a better response rate, longer progression-free as well as overall survival.

The response rate among patients with a BRAFV600E MSS mCRC carrying a RNF43 mutation reached 72.7%, and only 30.8% in those without.

In patients with tumours harbouring the RNF43 mutation, median disease-free progression was 10.1 months versus 4.1 months.

Importantly, overall survival in the former was 13.6 months compared to 7 months in the latter.

“Our data point to RNF43 as a potential stratification biomarker that could help steer treatment decision making as well as define the optimal sequence of treatment in patients with microsatellite stable, BRAF V600E- mutant metastatic colorectal cancer. As importantly, it could also help to identify those patients for whom alternative treatment options are very much needed,” adds Toledo.

While these results could usher in a much-needed biomarker of response in this setting, the study authors suggest that further research should seek to incorporate this candidate biomarker in routine testing along with BRAF and MSS/Microsatellite Instability (MSI) status and evaluate their possible integration with other transcriptomic, microbiome, and microenvironmental indicators.

“The discovery and validation of robust biomarkers of drug response in this patient population will help to prioritise anti-EGFR/BRAF combinations in those patients who are more likely to derive benefit, as well as optimise the clinical management of such a heterogeneous and highly complex disease,” concludes Elena Élez, a Medical Oncologist at Vall d’Hebron’s Medical Oncology Department headed by Josep Tabernero, also a co-author of this present study.