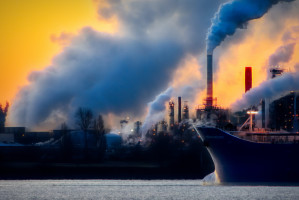 A new mechanism has been identified through which very small pollutant particles in the air may trigger lung cancer in people who have never smoked, paving the way to new prevention approaches and development of therapies, according to late-breaking data reported at the ESMO Congress 2022 by scientists of the Francis Crick Institute and University College London, funded by Cancer Research UK.

The particles, which are typically found in vehicle exhaust and smoke from fossil fuels, are associated with non-small cell lung cancer (NSCLC) risk, accounting for over 250,000 lung cancer deaths globally per year.

“The same particles in the air that derive from the combustion of fossil fuels, exacerbating climate change, are directly impacting human health via an important and previously overlooked cancer-causing mechanism in lung cells. The risk of lung cancer from air pollution is lower than from smoking, but we have no control over what we all breathe. Globally, more people are exposed to unsafe levels of air pollution than to toxic chemicals in cigarette smoke, and these new data link the importance of addressing climate health to improving human health,” said Charles Swanton, the Francis Crick Institute and Cancer Research UK Chief Clinician, London, UK, who presented the research results at the ESMO 2022 Presidential Symposium on Saturday, 10 September.

The new findings are based on human and laboratory research on mutations in a gene called EGFR which are seen in about half of people with lung cancer who have never smoked.

In a study of nearly half a million people living in England, South Korea and Taiwan, exposure to increasing concentrations of airborne particulate matter (PM) 2.5 micrometres (μm) in diameter was linked to increased risk of NSCLC with EGFR mutations.

In the laboratory studies, the Francis Crick Institute scientists showed that the same pollutant particles (PM2.5) promoted rapid changes in airway cells which had mutations in EGFR and in another gene linked to lung cancer called KRAS, driving them towards a cancer stem cell like state.

They also found that air pollution drives the influx of macrophages which release the inflammatory mediator, interleukin-1β, driving the expansion of cells with the EGFR mutations in response to exposure to PM2.5, and that blockade of interleukin-1β inhibited lung cancer initiation.

These findings were consistent with data from a previous large clinical trial showing a dose dependent reduction in lung cancer incidence when people were treated with the anti-IL1β antibody, canakinumab (4).

In a final series of experiments, the Francis Crick team used state-of-the-art, ultradeep mutational profiling of small samples of normal lung tissue and found EGFR and KRAS driver mutations in 18% and 33% of normal lung samples, respectively.

Commenting on the results, Tony Mok, Chinese University of Hong Kong, not involved in the study, said: “This research is intriguing and exciting as it means that we can ask whether, in the future, it will be possible to use lung scans to look for pre-cancerous lesions in the lungs and try to reverse them with medicines such as interleukin-1β inhibitors. We don’t yet know whether it will be possible to use highly sensitive EGFR profiling on blood or other samples to find non-smokers who are predisposed to lung cancer and may benefit from lung scanning, so discussions are still very speculative.”

Like Swanton, he stresses the importance of reducing air pollution to lower the risk of lung diseases, including cancer.

“We have known about the link between pollution and lung cancer for a long time, and we now have a possible explanation for it. As consumption of fossil fuels goes hand in hand with pollution and carbon emissions, we have a strong mandate for tackling these issues – for both environmental and health reasons,” Mok concluded.