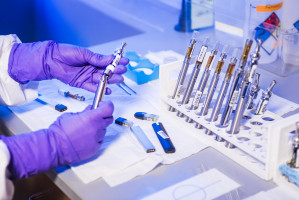 A type of blood cell cancer called angioimmunoblastic T-cell lymphoma (AITL) can develop as mutations accumulate with age in the stem cells from which the T cells in the blood develop.

However, the underlying mechanism by which AITL develops was unknown.

Now, a team from the University of Tsukuba have shown that B cells, another type of blood cells, accumulate mutations in genes that control how the genetic material in the cell is packaged.

These aberrant B cells then interact with T cells and lead to the development of AITL.

Blood cells such as B cells and T cells, involved in immunity, develop from stem cells in the bone marrow.

Sometimes, mutations occur in individual stem cells that lead to the mutant stem cell giving an increased output of blood cells, all of which carry identical mutations.

The likelihood of this increases with age, known as age-related clonal haematopoiesis, or ACH.

ACH is known to be linked to various cancers.

AITL, a cancer of the T cells, is linked to ACH with mutations in a gene called TET2.

The team used mouse models and human samples to show that the TET2 mutation needed to be present in all blood cells, not just the T cells, for a mouse model to develop AITL.

Using single-cell RNA sequencing, a technique that can show which genes are active within just one cell, they were able to profile the immune cells present in the samples.

This revealed a significant increase in the number of aberrant "germinal center B cells", a type of B cells with activating and proliferative capacities.

These B cells showed recurrent mutations to genes for histone proteins, which organise the genetic material in the cell into higher structures.

They also showed alterations to the pattern of a DNA modification called methylation, which affects the genes expressed in the cell.

B cells and T cells can interact through molecules on the cell surface known as CD40 and CD40 ligand.

"Analysis of the single-cell sequencing data identified this interaction between CD40 and CD40 ligand as potentially essential for mediating crosstalk between the aberrant B cells and the tumour cells," explains lead author Manabu Fujisawa.

"Most importantly, the survival of the mice with AITL could be prolonged by treatment with an antibody designed to inhibit CD40 ligand," explains main author Professor Mamiko Sakata-Yanagimoto.

"The genes expressed in the aberrant mouse GCB cells are also expressed in cells from human AITL with TET2 mutations."

This means that antibodies against CD40 ligand could potentially be a new therapeutic approach to human AITL.