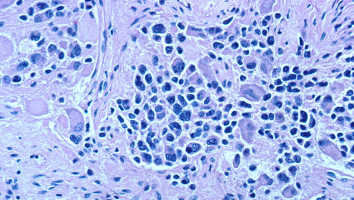 Almost half of children with high-risk neuroblastoma harbour extra copies of the gene MYCN (MYCN amplified), the primary driver of neuroblastoma and its resistance to therapy.

“Treating neuroblastoma by directly targeting MYCN has been challenging,” said Dr Eveline Barbieri, corresponding author of a recent study published in the journal Nature Communications and assistant professor of paediatrics – haematology and oncology at Baylor College of Medicine and Texas Children’s Hospital.

“In this study we investigated new strategies to improve the survival of children with MYCN amplified neuroblastoma by looking into metabolic vulnerabilities that we could exploit to overturn these tumours' resistance to therapy.”

The results of their innovative approach showed that there were important differences between tumour cell utilisation of specific nutrients for tumour growth in these two tumour groups.

“We found that MYCN amplification rewires a tumours' lipid metabolism in a way that promotes the use and biosynthesis of fatty acids, a type of lipid cells can use as a source of energy,” Barbieri said. “Cells with extra copies of MYCN depend highly on fatty acids for their survival. We confirmed this both in MYCN-amplified cell lines and in MYCN- amplified patient tumour samples.”

“When we investigated what prompted MYCN-amplified neuroblastomas to rely on fatty acids to grow, we discovered that MYCN directly upregulates or enhances the production of fatty acid transport protein 2 (FATP2), a molecule that mediates cellular uptake of fatty acids,” Barbieri said. “We then asked, what would happen if we interfered with FATP2 function in MYCN-amplified neuroblastomas?”

When the researchers neutralised FATP2 activity, either by knocking down the gene or by blocking FATP2 action with a small-molecule inhibitor, they reduced the growth of MYCN-amplified tumours.

“We observed that when we blocked the import of fatty acids into the cancer cells, and there was a reduction in tumour cell growth,” Barbieri said. “The interesting part is that inhibiting or blocking FATP2 had no effect on normal cells or tumours without MYCN-amplification. This seems to be a selective metabolic vulnerability of MYCN-amplified tumours. They uniquely use this transporter to feed on fatty acids to grow.”

There are other MYCN-amplified paediatric and adult tumours.

“This approach may be applicable to many human cancers that utilise MYC for oncogenesis (about 50% of cancers overall) and provide new insight into the regulation of energy metabolism in cancer progression,” Barbieri said.

“More work is needed before this approach can be employed in the clinical setting,” Barbieri said. “But this study suggests that strategies to interfere with a tumours' nutritional dependence on fatty acids is a promising therapeutic strategy worthy of further investigation.”