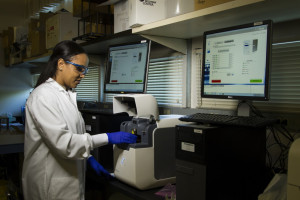 Melanopsin (OPN4) is a light-sensing protein found in skin and retina cells. A new study conducted at the University of São Paulo (USP) in Brazil suggests that OPN4 can also participate in the development and progression of melanoma, the most aggressive type of skin cancer.

In experiments with animals and genetically modified cells at the Comparative Physiology of Pigmentation Laboratory belonging to the Institute of Biosciences (IB-USP), the researchers showed that the disease advances more slowly when this protein is not functional. The findings are reported in an article published in Communications Biology, a Springer Nature journal.

Although other groups had already shown that opsins are involved in cancer, this is the first such finding for melanoma, which accounts for 5% of malignant skin tumours and 80% of all deaths from cancer. The study was supported by FAPESP.

The basis for the study was an investigation by the same group using models of melanocytes (melanin-producing skin cells) to show that melanopsin was expressed in these cells and participated in processes such as pigmentation, biological clock adjustment, and even cell death due to ultraviolet A radiation (more at: https://agencia.fapesp.br/24231/).

The latest study used the DNA editing technique known as CRISPR to alter the sequence of the gene Opn4 and create a stable melanoma cell model with a non-functional version of the protein.

“When we created the knockout cells [without a functional OPN4 gene], we realised they had a very different phenotype: they grew less and displayed reduced proliferative capacity. We wondered why and decided to find out whether melanopsin played a role in melanoma progression or carcinogenesis,” said Leonardo Vinícius Monteiro de Assis, first author of the article and currently a researcher at the University of Lübeck in Germany. Assis partnered on the study with José Thalles Lacerda, the second author of the article.

The theory was confirmed first in experiments performed in vitro and then in animals. Tumour cells containing the non-functional version of OPN4 grew less and more slowly than wild-type cells (without modification of OPN4). The discovery was later confirmed using proteomics and data from public databases.

“In sum, we showed that cell growth decreases in melanoma when you remove OPN4. This is basically due to two processes that aren’t necessarily related but can be: increased activation of the immune system, although we don’t yet know why; and a very significant reduction in signalling by GTPases, proteins resembling tiny motors that play a role in cell cycle progression and are greatly reduced in these tumours,” Assis said.

According to Assis, all these findings together suggest for the first time that melanopsin acts as an oncogene in melanoma, i.e., that it is associated with the development and growth of this type of cancer. Until now, melanopsin had never been linked to the development of tumours. More experiments on melanoma cell lines and other approaches are still needed to arrive at a definitive confirmation of this role.

The Comparative Physiology of Pigmentation Laboratory, led by physiologist Ana Maria de Lauro Castrucci, is one of only a few research groups worldwide to have demonstrated (in 2018) that melanopsin also detects temperature, acting independently as a thermosensor and a photosensor. With the new information, it has now added one more important aspect by showing that the molecule can become a promising therapeutic tool in the future.

“Melanopsin could be explored for the treatment of melanoma, and this opens up a new avenue for research on its role in other diseases, such as those of the liver, where opsins are also present,” Assis said.

Castrucci’s lab is currently investigating the systemic role of melanopsin in organs it is not classically known to influence, such as fatty tissue, the liver, and the heart, among others.