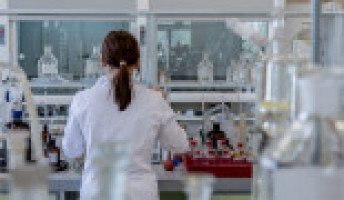 The research was presented today at the IASLC 2022 World Conference on Lung Cancer in Vienna.

The PACIFIC trial demonstrated that a year of consolidation PD-(L)1 inhibition following concurrent chemoradiation (CRT) for unresectable stage III NSCLC improves overall survival, but the optimal duration of consolidation immunotherapy in this setting is undefined.

This trial evaluated the use of combination nivolumab plus ipilimumab or nivolumab alone for up to six months in unresectable stage III NSCLC after concurrent chemoradiation.

The primary endpoint is 18-month progression-free survival compared to historical controls of chemoradiation alone for arm A (30%) and chemoradiation followed by durvlumab for arm B (44%).

There was one grade five event in each arm (COVID19-in Arm A, cardiac arrest in Arm B).

OS data are still maturing but 18- and 24-month OS estimates compare favorably to prior consolidation trials.

Toxicity for N alone was similar to prior single-agent trials, and the combination of N + IPI resulted in a higher incidence of trAE’s, although consistent with prior reports.