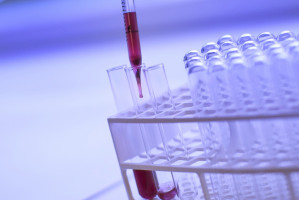 UCF researchers have found a new way to track metastatic cancer cells in the body, which in the future could help identify cancer earlier and give patients more treatment options.

In the latest issue of PLOS ONE, Dr. Annette Khaled’s research lab reported using a protein complex called a chaperonin as a new marker for cancer cells in blood -- that provides a clearer indication of spreading cancer.

By using the new marker, UCF scientists were able to detect more cancer cells in the blood, a procedure called liquid biopsy, which could help patients suffering from breast and lung cancers better monitor their disease.

Cancer cells need a lot of proteins to survive and travel through the body.

All cells contain the chaperonin complex.

But cancer cells have significantly higher levels because as Dr. Khaled explains, “cancer cells are hungry for protein.”

Without this protein-folding mechanism, cancer cells starve and die.

Markers to identify cancer cells in blood are commonly based on epithelial features in cells that line surfaces of the body from which cancers arise.

But such markers to detect cancer cells in blood are fairly “generic,” Dr. Khaled explained “and provide little information about the cancer itself.”

Cancer cells that are shed into blood can come from any part of the tumour and don’t survive past a few hours.

So, using a marker like the chaperonin complex that identifies dangerous cancer cells circulating in blood could alert doctors that a patient is relapsing or not responding to treatments.

Dr. Khaled is head of the College of Medicine’s Division of Cancer Research.

Her study began by using blood and tissues from metastatic breast cancer patients being treated at Orlando Health’s UF Cancer Center to test if the chaperonin complex was better than traditional markers to identify cancer cells in blood.

Then with blood from lung cancer patients, she validated this idea and found that using the chaperonin complex detected more lung cancer cells compared to standard methods for liquid biopsy.

The UCF research team used the FDA-approved CELLSEARCH System, that was purchased thanks to a generous donation from the Catherine McCaw-Engelman and Family Cancer Research Collaborative Fund, set up to honor a Winter Park woman who died of colon cancer that was not detected until it had spread.

The equipment can isolate, photograph and count cancer cells from a single tube of blood and was adapted for detection of the chaperonin complex in blood cells.

The findings come as a result of $1.5 million Dr. Khaled has received over the past seven years from Orlando’s Cure Bowl, the only NCAA college football bowl game created specifically to support a cause – cancer research.

Dr. Khaled’s latest Cure Bowl grant of $60,000 will be presented to her at the game in December.

Dr. Khaled joined UCF in 2002 after receiving her Ph.D. from the University of Florida and doing post graduate training at the National Cancer Institute (NCI).

A tenured professor, she has been funded by multiple RO1 grants from the National Institutes of Health, the Breast Cancer Research Foundation, and most recently the Florida Dept of Health.

She has published more than 100 manuscripts and abstracts and presented her research at numerous national and international scientific meetings.

She has been recognised with research, leadership and teaching awards including the NCI CURE Lifetime Achievement Award.

In addition to her research responsibilities, she teaches molecular immunology to UCF graduate students and serves as the College of Medicine’s Assistant Dean for Faculty Affairs.