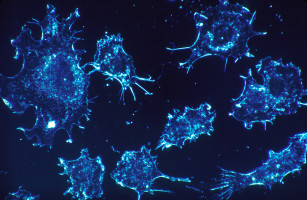 Apoptosis, a type of programmed cell death (PCD), is a biological process through which unwanted cells are eliminated in multicellular organisms.

In most cells, certain proteins known as “caspases” trigger apoptosis.

This process is especially important for the treatment of cancer, since inducing cell death in cancer cells can help in their elimination.

Other than apoptosis, several types of PCDs occur in cells, including paraptosis, necroptosis, and autophagy.

Of these, paraptosis is the most recently identified type of PCD, which is caused by the influx of excess calcium in the cells, leading to cell death.

Cancer cells often become resistant to drugs that induce apoptosis and other types of PCDs.

In such cases, inducing paraptosis, which is not dependent on caspases, could act as a promising anti-cancer treatment.

Hence, the development of compounds that can induce paraptosis in cancer cells is crucial.

To this end, a team of researchers from the Tokyo University of Science, led by Prof Shin Aoki in collaboration with Mr. Kohei Yamaguchi and Dr Kenta Yokoi, conducted a study to develop novel complex-peptide hybrids with paraptosis-inducing potential.

This study was made available online on 11 April 2022, and subsequently published in Volume 33 of the journal Bioconjugate Chemistry, on 20 April 2022.

“Previously, we synthesised an iridium complex-peptide hybrid compound and observed that it induced cell death in cancer cells, which was different from apoptosis.

Since this compound was unlike other paraptosis-inducing compounds, we wanted to understand its mechanism of paraptosis induction.

Our goal now is to synthesise new compounds and elucidate how they induce paraptosis in cells, before we share this crucial information with the public,” explains Prof Aoki while discussing the team’s motivation behind this study.

The newly synthesised compounds were composed of a triptycene core—an aromatic hydrocarbon—with two or three cationic peptides made of the amino acids lysine and glycine (represented as KKKGG) through a C8 alkyl linker chain, at different positions of the triptycene units.

The team subsequently performed experiments on Jurkat cells, a type of immortalised human lymphocytes used in research, to understand the type of PCD that occurred in these cells on treatment with syn-6 and anti-6.

However, cell death was not inhibited by inhibitors of the other types of PCDs.

Hence, they ruled out autophagy, necroptosis, and apoptosis, confirming that paraptosis is a major PCD pathway induced by syn-6 and anti-6 in Jurkat cells.

“Studies have indicated that the TPHs syn-6 and anti-6 induce the transfer of excess calcium from the endoplasmic reticulum (ER) to mitochondria, resulting in a loss of mitochondrial membrane potential. It is very likely that these phenomena are strongly related with the fusion of the ER with the mitochondria, followed by cytoplasmic vacuolisation, resulting in cell death,” said Prof Aoki, when asked why these two TPHs were selected for the study.

The TPHs syn-6, and anti-6 are more hydrophilic than other TPHs, which could also be a reason for their high paraptosis-inducing anti-cancer potential.

Through additional imaging experiments, the team detected the presence of cytoplasmic vacuolisation, elevated mitochondrial calcium concentrations, and the degradation of the ER in Jurkat cells treated with syn-6 and anti-6.

Based on previous findings, the team hypothesised that in Jurkat cells as well, the influx of calcium in the mitochondria might be facilitated by the close proximity of the ER and the mitochondria.

As expected, they found that the ER and mitochondrial membranes were attached to one another, facilitating direct transfer of calcium.

These findings confirmed that Jurkat cells treated with syn-6 and anti-6 had undergone programmed cell death, owing to paraptosis.

They also provide crucial information for the design of compounds that can be used as therapeutic agents against cancer and other diseases.

Here’s hoping that these promising findings contribute to the development of effective therapy against the ever-evolving cancer cells.