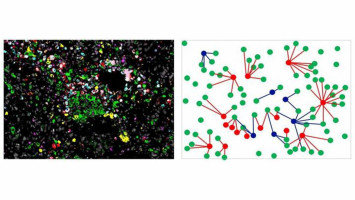 Scientists from the Ural Federal University and the Ural Branch of the Russian Academy of Sciences have created new fluorescent chemical compounds (fluorophores) for photodynamic therapy of cancerous tumours, the latest method of treating cancer.

The compound is suitable simultaneously for the diagnosis of tumour processes by staining the affected tissues and their further treatment by destroying tumour cells without harm to healthy ones.

The results of the primary studies was published in the Dyes and Pigments journal.

The synthesis of these fluorophores is characterised by low cost, due to the availability of all derivatives in the composition, as well as the absence of impurities that could lead to side effects.

The effectiveness of the fluorophore was tested on HeLa cells used as a model of cervical cancer.

Now scientists are testing how the new compound interacts with other types of cancer cells.

Fluorophores are chemical compounds that emit visible light (photoluminescence) when exposed to ultraviolet or visible light.

They are able to spread through biological tissues and stain cells prone to inflammatory processes.

Thus, a new compound interacts with biomolecules of body tissues and, under UV or visible irradiation, stains areas in which the process of tumour growth is taking place.

This makes it possible to determine the size of the tumour in the body and outline its boundaries.

During the experiments, scientists found that the new fluorophore performs a dual function: it not only stains diseased areas, but also begins to destroy them.

“Initially, we investigated only the dyeing properties of the compound,” says Grigory Zyryanov, co-author of the study and Professor of the Department of Organic and Biomolecular Chemistry at UrFU. “The compound is able to accumulate in certain areas of the cell - the cell membrane and reticulum (an intracellular organelle responsible for protein folding), and under ultraviolet or visible irradiation, highlight the infected areas in bright green. However, it turned out that the fluorophore then functions as a photosensitizer. That is, under the influence of optical irradiation, it begins to interact with the surrounding cellular environment (oxygen, water, etc.) and generates free radicals, the so-called reactive oxygen species. These active particles enter into chemical interactions with affected cells, starting their destruction, while practically not affecting healthy ones. This is called photodynamic therapy, it is a new promising method of cancer treatment with high efficiency and minimum side effects.”

Chemists synthesised a fluorophore based on naphthoxazole, an oxazole derivative used in the synthesis of medicinal and biochemical preparations, and a naphthalene fragment used as a platform and so-called antenna for more efficient perception of optical irradiation by a molecule. In addition, chemists added fragments of pyrene and anthracene, polynuclear aromatic hydrocarbons with a high fluorescent response, that is, a bright glow, to the compound.

“Pyrenes are very commonly used for bioimaging, anthracenes are less common,” says Grigory Zyryanov. “These compounds are promising for many reasons, including we were able to show that the pyrene-containing compound begins to glow even when irradiated with visible light, and this is visible even to the naked eye. This is very convenient, including, for example, for surgical interventions, when it is still necessary in the treatment.”