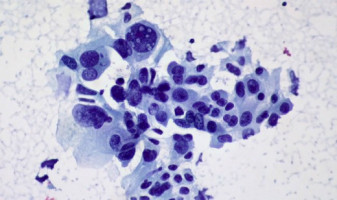 Researchers at the Spanish National Cancer Research Centre (CNIO) and the Cancer Research UK Cambridge Institute have developed a method to understand the genetic chaos observed in the most lethal types of cancer.

This information can be used to design more effective precision therapies as well as improve treatment selection for patients.

The study will be published in Nature, one of the world’s leading scientific journals.

The approach described in the paper detects patterns of large DNA alterations in tumour genomes that help make sense of the mutational processes underlying cancer development.

A better understanding of the genomic identity of aggressive cancers can lead to improved treatment selection and the development of more effective therapies, which has been virtually impossible for these cancer types to date.

The research was jointy led by Geoff Macintyre, Head of the Computational Oncology Group at the CNIO, and Florian Markowetz, Senior Group Leader at the Cancer Research UK Cambridge Institute.

Each daughter cell will contain the same number of chromosomes as their parent cell, with the exact same DNA sequence.

In cancer cells, however, this duplication does not occur perfectly.

There are losses or gains of chromosome segments, and even entire chromosomes can be absent or present in more than usual numbers.

Chromosomal instability is a highly complex biological process that is present in roughly 80% of all cancers.

There are multiple causes of chromosomal instability and a variety of consequences, which has limited researchers understanding of the phenomenon to date.

The study conducted by CNIO researchers unravels the complexity of chromosomal instability and allows for improved analysis of many different types of cancer.

The study analysed the diversity and the extent of chromosomal instability across severe cancers.

Moreover, it defined the biological causes of different types of chromosomal instability and how this relates to different tumour types.

Currently, the most advanced cancer treatments are based on the concept of precision medicine, which involves using genetic mutations to inform which therapy a patient should be treated with.

Tumours with chromosomal instability exhibit many defective genes, not just a single mutation, which means there are too many potential options to target therapeutically.

The study conducted by the CNIO researchers solves this problem by establishing a catalogue of chromosomal instability signatures that can be identified at the time of diagnosis.

The information associated with each pattern includes potential responses to traditional cancer treatments and novel treatments.

This means that the signatures can be useful as biomarkers for diagnosing aggressive cancers and selecting the most effective therapy for a patient.

In the words of Macintyre, one of the senior members of the team, “Our biomarkers can predict the effectiveness of different therapies for a given tumour.” “To understand the genomic chaos seen in these deadly cancers, we developed an approach to quantify different types of chromosomal instability using a collection of 7880 tumours representing 33 cancer types,” he adds.