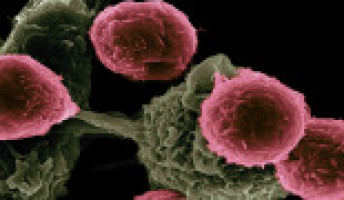 As they grow, solid tumours surround themselves with a thick, hard-to-penetrate wall of molecular defences.

Getting drugs past that barricade is notoriously difficult.

Now, scientists at UT Southwestern have developed nanoparticles that can break down the physical barriers around tumours to reach cancer cells.

Once inside, the nanoparticles release their payload: a gene editing system that alters DNA inside the tumour, blocking its growth and activating the immune system.

The new nanoparticles, described in Nature Nanotechnology, effectively stopped the growth and spread of ovarian and liver tumours in mice.

The system offers a new path forward for the use of the gene editing tool known as CRISPR-Cas9 in cancer treatment, said study leader Daniel Siegwart, Ph.D., Associate Professor of Biochemistry at UT Southwestern.

“Although CRISPR offers a new approach for treating cancer, the technology has been severely hindered by the low efficiency of delivering payloads into tumours,” said Dr Siegwart, a member of the Harold C. Simmons Comprehensive Cancer Center.

In recent years, CRISPR-Cas9 technology has given researchers a way to selectively edit the DNA inside living cells. While the gene editing system offers the potential to alter genes that are driving cancer growth, delivering CRISPR-Cas9 to solid tumours has been challenging.

For more than a decade, Dr Siegwart and his colleagues have been studying and designing lipid nanoparticles (LNPs), small spheres of fatty molecules which can carry molecular cargo (including recent mRNA COVID-19 vaccines) into the human body.

In 2020, Dr Siegwart’s group showed how to direct nanoparticles to specific tissues, which had been a challenge limiting the field.

In the new work, to target cancer, the researchers began with the nanoparticles that they had already optimised to travel to the liver.

They added a small piece of RNA (called short interfering RNA or siRNA) that could shut off focal adhesion kinase (FAK), a gene that plays a central role in holding together the physical defences of a number of tumours.

“Targeting FAK not only weakens the barricade around tumours and makes it easier for the nanoparticles themselves to make their way into the tumour, but also paves the way to allow immune cells in,” said Di Zhang, Ph.D., a postdoctoral research fellow at UTSW and first author of the paper.

Inside the newly engineered nanoparticles, the researchers encapsulated CRISPR-Cas9 machinery that could edit the gene PD-L1.

Many cancers use this gene to produce high levels of the PD-L1 protein, which puts the brakes on the immune system’s ability to attack tumours.

Scientists have previously shown that disrupting the PD-L1 gene, in some cancers, can lift those brakes and enable a person’s immune system to kill cancer cells.

Drs Siegwart, Zhang, and their colleagues tested the new nanoparticles in four mouse models of ovarian and liver cancer.

They first showed that by adding siRNA to shut off FAK, the matrix of molecules around the tumours was less stiff and easier to penetrate than normal.

Then, they analysed the tumour cells and found that many more nanoparticles had reached the cells, effectively altering the PD-L1 gene.

Finally, they found that tumours in mice treated with the nanoparticles that targeted both FAK and PD-L1 shrank to about one-eighth the size of tumours treated only with empty nanoparticles.

In addition, more immune cells infiltrated the tumours and the treated mice survived, on average, about twice as long.

More work is needed to show the safety and efficacy of the nanoparticles in a variety of tumour types.

The researchers said the therapy may be useful in conjunction with existing cancer immunotherapies that aim to use the immune system to attack tumours.

“After the worldwide success of the COVID-19 LNP vaccines, we are all wondering what else LNPs can do. Here we developed new LNPs capable of delivering multiple kinds of genetic drugs simultaneously to improve therapeutic outcomes in cancer. There is clearly great potential for LNP medicines to treat different kinds of diseases,” said Dr Siegwart.