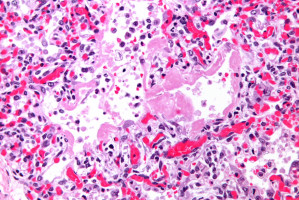 Androgen receptor (AR) signalling affects response to BRAF/MEK inhibitor therapy in both males and females with melanoma, researchers from The University of Texas MD Anderson Cancer Center showed in a study published today in Nature.

The findings provide a new target to combat therapeutic resistance and one possible answer to why men face a poorer prognosis than women when diagnosed with melanoma.

The AR is a type of nuclear receptor that’s activated by the male sex hormone testosterone.

Females have lower levels of androgens, including testosterone.

This research confirms the impact of biological sex on response to BRAF/MEK targeted therapy and shows for the first time that these inhibitors increase AR signalling, leading to therapeutic resistance and poor response to treatment.

In preclinical models of melanoma, blocking the AR improved response to BRAF/MEK targeted therapy in both males and females.

“This study, coupled with other recent publications looking at the impact of AR signalling on response to other types of cancer therapies, such as immune checkpoint blockade, has enormous implications for the field,” said senior corresponding author Jennifer Wargo, M.D., professor of Genomic Medicine and Surgical Oncology. “We know males and females get cancer at different rates and have different mortality. Our research raises the possibility that the AR and testosterone may be at play and offers a new target to improve response to treatment in both sexes.”

The study began with an observation from a neoadjuvant clinical trial for BRAF/MEK inhibitors in stage III melanoma (NCT02231775) where female patients had a higher rate of major pathologic response (MPR, defined as <10% viable tumour at time of surgery) rates and recurrence-free survival (RFS) rates than male patients.

After ruling out other possible factors contributing to MPR — including age, performance status, body mass index (BMI), stage of disease and mutation status — the research team validated the sexual dimorphism in several other cohorts.

The analysis included a total of 664 patients who received BRAF- and/or MEK-targeted therapy for stage III or stage IV melanoma.

In multiple studies, the researchers found a trend toward improved progression-free survival (PFS) and overall survival (OS) in females versus males.

In collaboration with MD Anderson’s Translational Research to Advance Therapeutics and Innovation in Oncology (TRACTION) platform, the researchers validated their observational findings in several preclinical models.

“This study speaks to our commitment to transform patient care through a reverse translation strategy that is exemplified at MD Anderson,” said co-corresponding author Timothy Heffernan, Ph.D., vice president of oncology research in MD Anderson’s Therapeutics Discovery division and head of TRACTION.

When all mice were given testosterone, tumour progression and treatment resistance occurred in both sexes.

Finally, when mice were given an AR inhibitor plus targeted therapy, responses to melanoma treatment improved in both sexes.

“By using translational studies in patient samples alongside preclinical models, we showed that treatment with BRAF/MEK inhibitors is associated with upregulation of the AR on tumour cells, thus promoting resistance to therapy,” said co-corresponding author Joseph Marszalek, Ph.D., co-leader of TRACTION. “We found that blocking the AR actually improved treatment response in males and females, and that activating AR signalling with testosterone abrogated therapeutic response.”

Recent research showed that AR-mediated resistance may have an impact on other cancers and types of treatment.

The current findings emphasise the need to better understand the impact of receiving hormone therapy while undergoing BRAF and/or MEK inhibitor therapy for melanoma and other cancers.

“There are many factors that can influence differences between biological sex and cancer outcomes, but hormones will be one of the next big areas of research focus,” Wargo said. “The good news is that we already have ways to modulate hormones, so the field is well-positioned to develop studies and novel therapeutics to take into the clinic. There are brilliant investigators at MD Anderson and worldwide who already are studying the use of AR blockade in combination with other cancer treatments across several cancer types.”