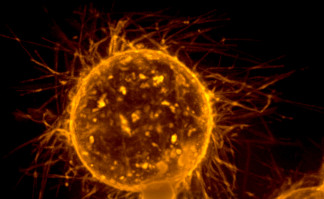 Chimeric antigen receptor (CAR) T cell therapy is a form of immunotherapy in which T cells are genetically engineered to express T cell receptors that target a specific protein.

Since its FDA approval in 2017, CAR-T cell therapy has been a staple treatment for blood cancers such as multiple myeloma.

New cancer cell targets are being discovered continuously, allowing for further tailoring of the CAR-T cells for a specific patient. In the multicenter CARTBCMA-HCB-01 study (NCT04309981), the efficacy and safety of a novel autologous CAR T-cell product (ARI0002h) targeting B-cell maturation antigen
(BCMA) were evaluated in patients with relapsed/refractory multiple myeloma.

Patients were eligible for the study if they had refractory disease and had received ≥2 prior regimens including a proteasome inhibitor, an immunomodulatory drug, and an anti-CD38 antibody.

A bridging therapy was allowed after apheresis and lymphodepletion was achieved using cyclophosphamide and fludarabine. A total of 35 patients with a median age of 61 years were included in the trial, of whom 30 were eligible to receive the targeted dose of 3x106 CAR+ cells/kg. CAR-T cell production time averaged 11 days and had a 100% success rate.

The primary outcome measures of the study were overall response rate defined as at least partial response assessed per IMWG criteria and bone marrow
minimal residual disease (MRD) within 3 months of the first infusion and rate of cytokine release syndrome (CRS) and/or neurological toxicity in the first 30 days.

The overall response rate of the 30 evaluable patients was 100% with 90% of patients showing stringent complete remission and very good partial response.

The time to first response averaged one month and 92% of the MRD-evaluable patients at day 100 post-infusion were MRD-negative in the bone marrow.

The 16-month overall survival rate was 80% and 53% of patients did not experience disease progression. Out of 28 eligible patients, 24 patients (86%) received a second dose of 1.2–3x106 CAR+ cells/kg, of whom 7 patients (29%) showed an improved response after reinfusion.

CRS was
observed in 87% of patients and neutropenia, anaemia, and thrombocytopenia occurred in 97%, 85%, and 79% of patients, respectively. However, no neurotoxicity related to the treatment was reported.

In conclusion, ARI0002h is an efficacious treatment for relapsed/refractory multiple myeloma with deep and durable responses and a favourable safety profile. Importantly, the response may be boosted using a second dose.