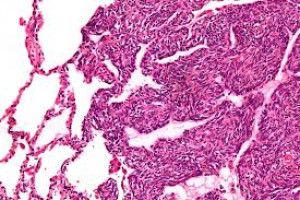 The median overall survival (OS) was not reached, and the two-year OS rate was 90% for UPS and 82% for DDLPS.

In correlative studies, the authors also identified an association between international B-cell receptor (BCR) repertoire at baseline and survival following immune checkpoint blockade, the first time this biomarker has been reported in sarcoma.

“The two-year follow-up data from this study confirms that recurrence rates and survival are favourable with the addition of neoadjuvant immunotherapy compared to rates expected with surgery alone, based on historical controls, in a patient population that typically has very high recurrence rates,” said Emily Keung, M.D., assistant professor of Surgical Oncology and lead author of the study. “Previous studies assessed immune checkpoint blockade in heavily pre-treated patients with advanced unresectable or metastatic soft-tissue sarcoma, so it’s encouraging to see these results in patients with earlier stage, operable disease.”

Approximately 13,000 new cases of soft-tissue sarcoma are diagnosed each year and, with dozens of different histologies, each one is a rare cancer.

DDLPS and UPS are two of the most common types of soft-tissue sarcoma.

For patients with resectable soft-tissue sarcoma, surgery is the only potentially curable treatment option, but many patients with UPS or DDLPS see their cancer return within five years.

The single-institution study (NCT03307616) enrolled 17 patients with DDLPS and 10 patients with UPS amenable to surgical resection.

At enrolment, 65% of DDLPS patients and 10% of UPS patients had recurrent disease.

At the time of surgery, pathological response was 90% in UPS and 18% in DDLPS, which is consistent with early results from the study presented at ASCO 2020.

Historically, pathological responses to neoadjuvant chemotherapy and radiation therapy were 20% to 30% at time of surgery.

However, pathological responses to immunotherapy did not predict overall survival, underscoring the need for biomarkers of response.

Toxicities were manageable and there were no new safety concerns compared to known safety profiles for nivolumab and ipilimumab.

Fatigue, diarrhoea and rash were the most common side effects.

After noticing trends in T and B cell populations and treatment response, which were presented at the Society for Immunotherapy of Cancer (SITC) 36th Annual Meeting, the research team performed bulk tumour RNA sequencing.

They found that both diversity and clonality of BCR repertoire in the tumour microenvironment at baseline was associated with a trend for improved PFS and a significant association with OS.

“We’re excited to introduce a novel biomarker for response to immune checkpoint blockade in sarcoma. We and others previously reported the prognostic impact of B cell infiltration, but the BCR repertoire had not yet been characterised in soft-tissue sarcomas,” Keung said. “The study design allowed us to learn a lot from a small group of patients with a rare disease, where it’s not possible to enrol large cohorts. We’re grateful to the patients who participated and are looking forward to continuing our work evaluating novel approaches, including neoadjuvant studies, to treat and improve outcomes for our patients with rare cancers.”

The team also found that tertiary lymphoid structure signature within tumours at baseline was associated with improved survival.

These results will be further detailed in a future manuscript and in a presentation (abstract 2511) from Elise Nassif, M.D., postdoctoral fellow of Surgical Oncology, on Monday, June 6.