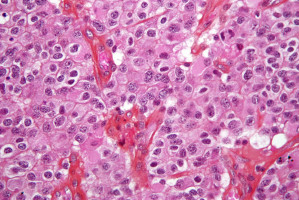 Secondary findings showed an improved clinical benefit rate and prolonged progression-free survival for dabrafenib plus trametinib compared to carboplatin plus vincristine, according to new research that will be presented at the 2022 American Society of Clinical Oncology (ASCO) Annual Meeting.

The primary trial endpoint was met with an ORR of 47% for dabrafenib plus trametinib  compared to 11% for carboplatin plus vincristine.

For secondary endpoints, the clinical benefit rate was 86% for dabrafenib plus trametinib vs. 46% for carboplatin plus vincristine and the median PFS was 20.1 vs. 7.4 months, respectively.

The findings were assessed independently by a central medical imaging vendor.

“For paediatric patients with BRAF V600-mutant low-grade glioma, dabrafenib plus trametinib may offer an improved standard of care.

This represents an important advance for the youngest patients with brain cancer, as this is the first combination of targeted therapies developed for patients as young as one year of age,” said lead author Eric Bouffet, MD,  FRCPC, Director of the Paediatric Neuro-Oncology Program at The Hospital for Sick Children in Toronto, Canada.

In the treatment arm, patients received the BRAF inhibitor dabrafenib plus the MEK inhibitor trametinib.

Dabrafenib targets the V600-mutant form of BRAF, which is found at varying prevalence in many types of cancer, while trametinib targets the kinase MEK within the same signalling pathway.

When combined, both medicines can inhibit the effect of the BRAF V600 mutation and thereby inhibit the growth of cancer cells with this mutation.

Patients assigned to the comparison arm received the chemotherapy drugs carboplatin and vincristine, two standard-of-care agents that have been used for decades.

Central nervous system tumours are the most common solid tumours in children.

An estimated  4,170 new cases of childhood brain tumours are expected to be diagnosed in the United States  i in 2022, with gliomas accounting for up to 50% of those cases .

Depending on their location, paediatric low-grade gliomas may not be able to be completely removed surgically, and patients with residual, progressive, or recurrent disease frequently require systemic therapy.

With current approaches to treatment, 5-year survival rates are  approximately 95%.

However, there is a continued risk of tumour progression and most patients require multiple lines of treatment.

The BRAF V600 mutation has been detected in about 15-20% of low-grade gliomas cases and may be associated with an increased risk of progression to high-grade glioma.

At the time this study was initiated, it was also noted, but not confirmed, that patients with BRAF V600-mutant disease may have worse outcomes than patients with non-mutated disease treated with the current standard of care.

Dabrafenib was shown to be clinically meaningful as a standalone therapy in a phase I/II trial in patients with previously treated BRAF V600–mutant low-grade glioma.

Data from the first paediatric study of dabrafenib plus trametinib demonstrated tolerability and preliminary  clinical activity of the combination in those patients.

The study was a double-blind clinical trial conducted at 57 investigative centres in 20 countries.

The trial randomly assigned 110 patients from the age of 1 to 17 who had BRAF V600 mutation-positive low-grade gliomas to either dabrafenib twice daily plus trametinib once daily or to standard-of-care doses of carboplatin plus vincristine.

The primary endpoint was the ORR.

This study is ongoing and is still collecting long-term safety data.

Safety data will also be collected in a companion study.

Researchers hope to learn more about the optimal duration of treatment.

The researchers hope to determine if this treatment fits into the World Health Organisation  (WHO) global initiative for childhood cancer.

Paediatric low-grade glioma is one of six diseases that comprise the WHO initiative and targeted therapies may have a potential impact as part of this initiative.

“This study shows that a new, oral targeted therapy combination can significantly improve outcomes for the most common type of brain tumour in children over standard-of-care chemotherapy that often requires frequent visits to the hospital or clinic and can result in health problems later in life. It is exciting to see success in developing targeted treatments based on the unique genetic features of a tumour in a young patient,” said Melissa M. Hudson,  MD, FASCO, ASCO expert in paediatric cancers.