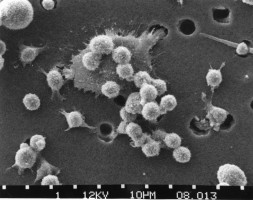 Initial study results show that an experimental drug, called nemvaleukin alfa, when used alone or in combination with another anticancer drug (pembrolizumab) may be effective in treating several types of late-stage cancers in some patients.

Both drugs are immunotherapies, medications designed to help the body’s immune defence system detect and kill cancer cells, much like it would an invading virus.

They work by boosting the action of immune cells that both directly attack the cancer and prevent cancer cells from evading immune system surveillance.

New generations and combinations of immunotherapies are needed, researchers say, because existing treatments do not work for all patients, especially those whose cancer has (after standard treatment) returned after remission or spread to other parts of the body.

The latest international Phase I/II study, led by a researcher at NYU Langone Health and its Perlmutter Cancer Center, showed that a series of injections of nemvaleukin alfa stopped tumour growth or resulted in some shrinkage for at least six months in four out of 22 (18%) men and women with advanced kidney cancer (renal cell carcinoma).

Some tumour shrinkage was also observed in four of 46 (8%) patients with various forms of melanoma (skin cancer). All had cancer that had previously failed to respond to other immunotherapies.

Side effects were minimal, although some patients experienced chills and anaemia (temporarily low blood counts).

The study findings, to be presented at the annual meeting of the American Society for Clinical Oncology (ASCO) in Chicago on June 4, also showed that nemvaleukin alfa demonstrated anticancer activity when used in combination with injections of another, more widely used immunotherapy, pembrolizumab.

Researchers found that the drug combination led to a sustained and tenfold increase in the production of CD8 T cells and natural killer cells, highly specialised immune cells known to fight cancer.

This occurred in 22 of 137 patients (16%) of study participants with all kinds of cancer, over half of whom (59%) experienced a total stall in their cancers’ progression.

Similar anticancer immune cell activity was observed in four of 14 (28%) women with ovarian cancer whose disease did not respond to initial drug chemotherapy.

“Our early results demonstrate that nemvaleukin alfa is a generally safe, tolerable, and potentially effective therapy for several different cancers,” says study senior investigator and oncologist Vamsidhar Velcheti, MD. “If further trial results prove successful, then nemvaleukin alfa, when prescribed on its own or in combination with other anticancer medications, could serve as a valuable option for people with advanced-stage cancer in which other therapies have not worked and for whom there are few remaining treatment options,” says Velcheti, an associate professor at NYU Grossman School of Medicine and a member of Perlmutter Cancer Center.

Velcheti, who also serves as director of Perlmutter’s thoracic medical oncology program, cautions that further results from the ongoing study would have to demonstrate similar benefits before nemvaleukin alfa treatment could become a “standard of care,” or go-to therapy, for patients with advanced cancers.

The current study, known as ARTISTRY-1, was funded by Alkermes Inc. of Waltham, Mass., the manufacturer of the nemvaleukin alfa drug used in the experiments.

Study participants, who range in age from 18 to 83, are being treated at more than a dozen cancer centers in the United States, Canada, and Europe.

The drug is an engineered version of a naturally occurring signalling protein called interleukin-2, which attaches to immune cells at a site called the interleukin-2 alpha receptor.

This in turn triggers the action of CD8 T cells and natural killer cells.

Because of its specificity, the drug does not target binding sites that increase the action of regulatory T cells, which cancer cells use to dial down immune responses against them.

Nemvaleukin alfa has already been granted fast-track status by the U.S. Food and Drug Administration for the treatment of advanced ovarian cancer, based in part on earlier ARTISTRY-1 findings.

Pembrolizumab is a well-tolerated immunotherapy drug known as pembro or Keytruda that has been in widespread use against a variety of cancers for the last decade.

Known as a checkpoint inhibitor, the drug blocks the PD-1 receptor site on certain immune cells that help cancer cells avoid detection and attack by other immune cells.