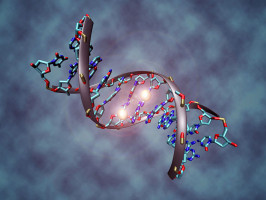 More and more mutations clutter up our DNA as we age. Mostly, these don’t cause problems. But sometimes, a switch will flip, and a mutated cell turns cancerous. Can we see this shift in time to prevent or treat cancer before it starts?

Led by researchers at Fred Hutchinson Cancer Research Center, a scientific team that studies a precancerous condition of the oesophagus (called Barrett’s oesophagus or BE) are working to answer this question. In work published in Nature Communications, the team revealed that DNA changes in BE cells that presage oesophagal cancer can be spotted years before cancer develops.

The characteristic changes include rearrangements of large chunks of DNA and damage to both copies of a tumour-suppressing gene called TP53.

“Most patients who progressed [to oesophagal cancer] had two ‘hits’ [changes that likely inactivate normal gene function] to TP53,” said Dr. Thomas Paulson, a senior staff scientist in the Grady Lab who co-led the project. “Cells with altered TP53 had spread to larger regions of the oesophagus and persisted over long periods of time compared to patients who didn’t progress to cancer.”

Though the team’s ultimate goal is to improve diagnostics and screening for oesophagal cancer, Paulson emphasized that this study compares the mutations and DNA changes that occurred in patients who progressed to cancer with those that occurred in patients with stable, benign BE. While the findings are significant and are based on an analysis of over 400 tissue samples, results from this 80-patient study would need to be validated in other patient groups before they could be used clinically to predict whether other BE patients will progress to cancer, he said.

Winding back the clock to cancer’s earliest stages

In some people with long-term acid reflux, Barrett’s oesophagus arises as a new type of oesophagal lining that better resists the damage caused by reflux. Even though it’s often accompanied by DNA mutations, most people will never need treatment for their BE, which will remain benign and stable. But for about 5% of patients with BE, their condition will progress to a kind of cancer called oesophagal adenocarcinoma. Though oesophagal cancer is relatively rare (about 20,000 new cases are diagnosed each year in the U.S.), it’s aggressive: Only 20% of patients survive five years past diagnosis.

However, 95% of patients with BE will never get cancer. For them invasive screening and preventive measures expose them to risks without benefits.

To address this, Hutch researchers set up the Seattle Barrett’s Esophagus Study in the early 1980s to learn more about BE, how it progresses, and find any genetic characteristics that flag patients at high or low risk of progressing to cancer. The ability to sort patients into risk categories, also known as risk stratification, would help doctors give patients the right amount of screening and intervention.

Because the team has studied patients for years, they have a long runway along which they can hunt for clues before cancer takes off.

Previous studies of the genetics of BE and oesophagal cancer-focused more on changes to specific genes,  but now advances in technology allow scientists to understand DNA changes outside genes (where most of our DNA lies). To learn more, the BE team undertook a sequencing study that covers all the DNA in a cell (known as the genome) in 427 tissue samples.

Highlighting the changes in oesophagal cancer

The team looked at small changes that altered just a few letters of DNA, and big changes that added, removed or moved around large swaths of DNA. First, they found that all BE is accompanied by lots of mutations, whether a patient eventually gets cancer or not.

“One of the critical results was how many genes were altered in patients who will never go on to cancer, that people think of as cancer-driver genes,” said project co-lead Patty Galipeau, a Public Health Sciences research program manager now in Dr. Gavin Ha’s lab, who helped shepherd the years-long project to completion.

In the researchers’ analyses, one cancer-associated gene in particular, TP53, stood out. It encodes a protein that regulates a lot of important cellular processes, including recognizing damaged DNA, repair and cell growth. It’s one of the most frequently mutated genes in all kinds of cancer — but the team found that some BE patients that didn’t progress to cancer also had a TP53 mutation.

However, their deeper dive into BE DNA revealed that the idea that any TP53 alteration leads to cancer is too simplistic. Humans get two copies of each gene (one from each parent). A person can have a mutation in one copy (one “hit”) or mutations in both copies (two hits).

“Most progressors had two hits in TP53,” said Paulson. Two hits would suggest a person is at very high risk for progressing from BE to cancer, though occasionally a person with one hit may also progress, he said. Patients who progressed to cancer also had TP53 mutations in larger regions of tissue, compared to the single-hit, localized lesions in non-progressing patients.

If both copies of TP53 in a person’s cells are broken, it’s very difficult for them to fix damaged DNA. This leads to duplications, deletions or reshuffling of large pieces of DNA. In fact, the team saw that BE cells in patients who progressed to oesophagal cancer were much more likely to contain these large, complex changes than cells from those who never progressed.

Looking to the future

Even though the current findings on their own aren’t enough to change diagnostic strategies for patients, the work has important insights that researchers who want to develop a biomarker test should keep in mind, such as that single TP53 mutations aren’t likely to help separate high-risk and low-risk patients, Galipeau said.

Led by senior author Dr. Xiaohong Li, the group is working to integrate these findings with other data, including different types of genetic analyses, to develop an algorithm that can optimize screening times and predict which BE patients are at risk of developing cancer.

A better future for BE patients will not merely rely on genetic analyses, but on new technologies that make taking biopsies easier or even unnecessary, Galipeau said. With Ha, she, Paulson and the rest of the team are exploring the possibility of developing a screening test based on DNA released into the blood from BE cells that would indicate a high risk of cancer, which ends up circulating in the blood. Such a test would allow doctors to evaluate patient status less invasively, using a blood draw rather than a scope down the throat.

The team also hopes their findings provide insights to other cancer researchers. They think that the genetic changes they spotted may reveal insight into how cells evolve to cope with stressful conditions — and how those coping mechanisms can backfire — and go beyond oesophagal-specific cancer mechanisms.

"I think this study emphasizes that when mutations are happening, they’re often happening in a tissue-specific context that’s not specific to cancer itself,” Galipeau said.