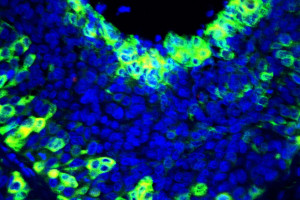 Researchers at the University of Oklahoma are testing an experimental treatment for metastatic cancer focusing on pancreatic cancer. Metastasis, the condition when cancer cells spread beyond the original tumour, is the “worst enemy” of cancer patients, said Wei R. Chen, Ph.D., the Stephenson Chair and Professor of Biomedical Engineering in the Gallogly College of Engineering.

“It is the metastasis of cancer that kills about 90% of cancer patients,” Chen said. “Pancreatic cancer is the worst of all because it metastasizes so fast. At the time of diagnosis, 80% of patients would either have local advancement or distance metastasis – where the cancer has spread to other parts of the body. The five-year survival rate of the patients with distance metastatic pancreatic cancer is only about 3%.”

The five-year study is funded by an approximately $2.5 million grant from the National Cancer Institute and is led by Chen and Min Li, Ph.D., a George Lynn Cross Research Professor of Medicine, Surgery and Cell Biology and the Virginia Kerley Cade Endowed Chair in Cancer Treatment.

Li, a leading expert in pancreatic cancer research, is working with Chen’s research team in all aspects of the study, including their investigative treatment of pancreatic tumours in mice and investigation of immune responses.

Chen’s research group has developed a novel method called localized ablative immunotherapy. This technique combines the use of laser ablation, where surgeons use a laser to destroy solid tumours, and an immunostimulant drug Chen’s group has developed, administered locally (at the site of the tumour) to stimulate, enhance and direct patients’ immune response to fight cancer cells.

“It is kind of like a one-two punch,” Chen said. “When tumours are destroyed by ablation, tumour antigens and other contents from the cancer cells are released.

He compares it to a kind of cancer vaccine. It doesn’t prevent the cancer, but it can help the body better fight it.

Chen said their study will help improve their understanding of how this local laser ablation-immunostimulant combination can help treat many forms of metastatic cancer.

“The work we’ve done so far is preliminary, yet promising in pre-clinical studies and clinical trials,” he said. “Now we need to look into many different components of this novel therapy – the dosage, how much ablation needs to be done to produce the right effect, how much of the drug do we need to use, and to better understand the impacts on immune system and survival rates. Immunological studies will improve our understanding of how and why the immune system responds.”