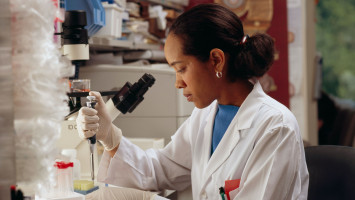 Metastasis, the ability of cancer cells to spread to other parts of the body, is notoriously difficult to treat and is the leading cause of death, meaning that early diagnosis and treatment are vital.

Cancer starts when certain changes take place within the genes inside the nucleus of a cell – the cell’s command centre which contains its DNA.

When examined under a microscope cancer cells look abnormal, and for over 150 years scientists have used changes in the size of the cell’s nucleus to diagnose cancer and its severity.

In many types of cancer these size changes are linked to increased metastasis, the ability of cancer cells to spread, reducing the chances of survival.

To tackle this, researchers at the Universities of Edinburgh, Montreal, and Eastern Finland screened drugs in the lab that reversed nucleus size changes in cells from three cancers – prostate, colon and lung.

The screen identified many existing cancer drugs, but also uncovered drugs not previously used to treat cancer, including those used for depression, heart disease and killing parasitic worms.

While each drug identified needs to be tested further to check if it is effective in reducing metastasis in cancer patients, the screen identified over a dozen drugs that may prove effective for each of the three cancers.

As the drugs can target specific types of cancer cells and are generally non-toxic, they could be added to existing treatments to reduce metastasis without further adding to the existing toxic side effects of chemotherapy.

The researchers found that in each cancer type, a different set of drugs could change the size of the nucleus in the opposite direction as the changes associated with an increase in metastasis.

Understanding why was confusing because size changes went in both directions - increased metastasis followed size increases in prostate and breast cancer and decreases in lung cancer.

Research into the causes of metastasis are ongoing, but it occurs when cancer cells break away from the original tumour and travel through the bloodstream to other parts of the body.

A smaller nucleus might make it easier for the cell to squeeze through the walls of blood vessels to enter other tissues while a bigger nucleus might be more malleable to enable such squeezing.

In nearly all the drugs tested, changing the size of the nucleus - in the opposite direction that normally occurs with metastasis - reduced the cell’s ability to move and invade tissues.

These size changes are likely to affect the cell’s speed and ability to move as the nucleus is closely connected to a network of filaments, known as the cytoskeleton, that control its movement.

Similar screens for other types of cancer are likely to identify other drugs that have the potential to target specific types of cancer and reduce metastasis whilst limiting toxic side effects.

Professor Eric Schirmer,Personal Chair of Nuclear Envelope Biology, School of Biological Sciences, University of Edinburgh, said: “The tissue and cancer type-specificity is the most interesting to me because this means the drugs are less likely to yield systemic toxicity or other side effects.

“This means that they could be added to existing treatments to reduce metastasis without adding to the toxicity these treatments have for the patients themselves. Also, since we only tested FDA/EMA-approved drugs, these could be delivered much more quickly to clinic.”