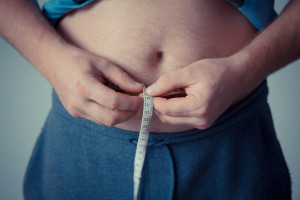 A new paper in JNCI Cancer Spectrum, published by Oxford University Press, indicates that overweight and obese people who lose weight may reduce their chances of later developing colorectal adenoma – a type of benign growth or polyp in the colon or rectum that could lead to colorectal cancer.

Colorectal cancer is the third most common type of cancer and the third leading cause of death from cancer among men and women in the United States.

Over the past 30 years, obesity has increased in the United States and worldwide, leading to the increased development of many chronic diseases. Obesity is a known risk factor for colorectal adenoma and colorectal cancer.

Doctors recommend weight loss for overweight and obese people commonly. Although weight loss is thought to have some beneficial health effects, whether losing weight can reduce the chance of developing colorectal adenoma has been an open question.

Most studies have only investigated colorectal adenoma risk in relation to obesity or body mass index assessed at one-time point, with fewer studies assessing the role of weight change.

The trial enrolled 154,942 men and women in the United States ages 55 to 74 from 1993 to 2001 to evaluate the effectiveness of different screening approaches in preventing death from various cancers. This current study used data from participants in the screening arm of the trial, who received a colorectal cancer screening test at baseline and again 3 or 5 years later.

The investigators found that, compared to stable weight, weight loss in adulthood (defined as loss greater than or equal to 1.1 pounds per 5 years) was associated with a 46% reduced risk for colorectal adenoma.

This was particularly true among adults who were initially overweight or obese. The investigators also reported that weight gain in adulthood was associated with an increased chance of adenoma, particularly for weight gain greater than 6.6 pounds over 5 years.

Findings for weight loss and weight gain appeared stronger among men than women. The researchers believe that the findings suggest the importance of healthy weight maintenance throughout adulthood in preventing colorectal adenoma. Additionally, adults who are overweight or obese may be able to reduce their risk for developing colorectal adenoma by losing weight.

“Based on our findings, we would not recommend weight loss for all adults. But the results suggest that overweight and obese adults may benefit from weight loss.”