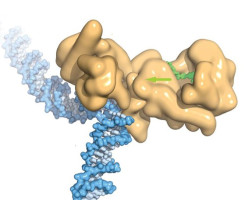 Scientists have revealed how cancer can resist PARP inhibitors, a precision medicine used to treat thousands of patients.

Their study found that some cancer cells could dodge the effects of PARP inhibitors, by removing the PARP proteins that get trapped onto their DNA.

The researchers believe that existing drugs – including a medicine used to treat alcohol addiction – could potentially be used to make PARP inhibitors more effective by preventing the cancer cells from removing PARP.

In the future, the findings could also help predict what patients are more likely to respond to PARP inhibitors.

The study, published today in Nature Cell Biology, was carried out by Cancer Research UK and supported by Breast Cancer Now.

PARP inhibitors, which include olaparib and rucaparib, are used to treat some patients with ovarian, breast, prostate and pancreatic cancers – usually patients who have inherited a faulty BRCA1 or BRCA2 gene.

So far, more than 30,000 patients have been treated with olaparib worldwide.

PARP inhibitors target PARP1, one of the DNA repair tools – rendering it inactive and locking it in place, trapped on the DNA. Not only does this stop DNA repair, but the trapping of PARP1 onto DNA will eventually cause cancer cells to die. But PARP inhibitors don’t work for everyone, and it’s estimated that over 40% of patients with a faulty BRCA1 or BRCA2 gene don’t respond to them.

To understand this better, Professor Chris Lord and his team at The Institute of Cancer Research, London, used cell lines and protein analysis techniques find out how cancer cells become resistant.

They looked for proteins that attached to PARP1 only when it was trapped, and that might play a role in detaching it from DNA.

The team found that a small molecule called p97 could play a crucial role in prizing PARP1 from the DNA, saving cancer cells from destruction.

The researchers wanted to see what happened if this last stage was blocked. They used a human ‘organoid,’ a mini tumour built with tissue from patients with triple negative breast cancer and a BRCA1 mutation; someone who might have qualified for PARP inhibitor treatment.

Blocking p97 made the cancer cells much more vulnerable to the PARP inhibitor talazoparib, suggesting a potential route to tackle treatment resistance. For instance, a 1nM dose of talazoparib killed about 30% of the cancerous organoid, but that went up to 90% when coupled with a p97 inhibitor called disulfiram.

This finding suggests that disulfiram, a drug commonly used to treat people with alcohol addiction, could be combined with PARP inhibitors to improve the chances of successful treatment.

For Professor Lord and his team, the next challenge is to translate their new understanding of PARP inhibitor resistance into a way to predict which patients should be treated with PARP inhibitors, and who would be better off getting a different cancer treatment.

Professor Chris Lord, Professor of Cancer Genomics at The Institute of Cancer Research, London, said: “PARP inhibitors are one of the most exciting classes of precision medicine in cancer treatment today, but we are only now gaining a fuller understanding of why they work in some patients but not in others.

“Now that we have uncovered p97’s role in controlling PARP inhibitor resistance, we could, in future offer treatments that could save many more lives.

Michelle Mitchell, chief executive of Cancer Research UK, said: “Our scientists helped to discover the BRCA gene over 25 years ago. Now we have drugs that target this mutation, which have saved many lives.

“But we know that cancer can quickly outwit even the best treatments. It’s important to understand the mechanisms behind resistance so that we can make the drugs we already have work better and for more people.

“Using new combinations of drugs that are already available is a smart way to get one step ahead of cancer, and we will need more research to know how effective this approach might be for PARP inhibitors. But the findings from this study are a promising new way to stack the odds in the patient’s favour, by offering treatment which works best for them.”

“People who have inherited an altered gene will have a higher risk of developing breast cancer and every year thousands of people in the UK with an altered BRCA1 or BRCA2 gene are diagnosed with the disease.

“PARP inhibitor drugs work well against cancer cells with an altered BRCA gene, however, they don’t work for everyone and some cancers become resistant to this targeted treatment, making it important we continue to fund research into understanding drug resistance.

Excitingly, this research suggests that a medicine currently used to treat alcohol addiction could be used in combination with PARP inhibitors to make treatment for breast cancer, caused by an altered BRCA gene, more effective.

We hope this research will lead to new treatment options and better ways to tailor therapy to each individual patient, so that everyone can receive treatment that works best for them.

“This breakthrough is testament to the tireless efforts of world-class researchers - including many Breast Cancer Now funded UK researchers – who, over the last 20 years, have helped develop PARP inhibitor drugs and laid the foundations for this promising discovery.”