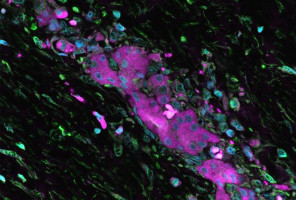 A research team with the Hefei Institutes of Physical Science (HFIPS), Chinese Academy of Sciences reported their discovery that a metabolic regulation mechanism may play a role in malignant transformation of non-alcoholic steatohepatitis to liver tumour.

The study team led by YANG Wulin spent more than two years on this work that was published in the International Journal of Biological Sciences last month.

Fatty liver, just as its name, is a common disease in liver marked with an excessive accumulation of fat in its cells.

The team was curious about the turning. They were planning to conduct a study to reveal the mechanism of how non-alcoholic steatohepatitis progresses to liver cancer.

Their work began with a mouse model that mimics the development of human fatty liver disease by studying changes in gene expression information that occur at various stages in the progression of NAFLD.

In each stage of the disease, they conducted a deeper analysis on gene differential expressions and gene set variations. Then they found carcinogenic signals were extensively activated during NASH. Even more, there was fatty acid metabolism which was regulated by LPL/FABP4/CPT1 signal axis was specifically up-regulated. The two may work together to promote tumour-initiating cell formation and then malignant transformation begins..

Based on these analyses, the team conducted further laboratory studies, which showed that inhibition of LPL/FABP4/CPT1 signalling axis effectively inhibited liver tumour growth in vivo.