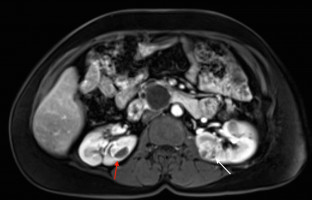 A targeted drug has shown promising activity against brain metastases resulting from kidney cancer, achieving a 50 percent response rate, and supporting further studies of the drug in this patient group whose poor prognosis has created a significant unmet need.

The drug, cabozantinib, is a tyrosine kinase inhibitor that attacks several targets in cancer cells.

It has been approved to treat advanced renal cell (kidney) cancer, but it has undergone very little testing in patients with brain metastases. Historically these patients are typically excluded from clinical trials out of concern for poor life expectancy and intervention tolerability.

The new report in JAMA Oncology suggests that cabozantinib can potentially pass through the blood-brain barrier to reach the metastases, some of which shrank significantly, said senior author Toni Choueiri, MD, director of the Lank Center for Genitourinary Oncology at Dana-Farber Cancer Institute.

The drug was tolerated in two cohorts of patients, amounting to 88 individuals with brain metastases from kidney cancer. Some patients also received local treatment with surgery or radiation, while others did not. Patients in one cohort survived for a median of 15 months, and 16 months in the other cohort.

Choueiri said that kidney cancer spreads to the brain in 2-10% of patients, causing significant morbidity and mortality, and the metastases are usually treated with surgery and/or radiation.

Until now, systemic treatment with targeted drugs like sunitinib has proven relatively ineffective, and immunotherapy drugs have not shown many benefits either. “A lot of drugs that work well outside the brain don’t work well for brain metastases,” Choueiri noted.

A few isolated case reports of cabozantinib in kidney cancer patients with brain metastases suggested potential benefit, prompting the new trial. “Given the sparse literature and high clinical need, we sought to assess the activity and safety of cabozantinib in patients with brain metastases from renal cell cancer, leveraging an international multicenter collaboration,” the researchers explained.

Following treatment with cabozantinib, “we measured the dimension of the metastases in the brain and saw a response rate that was higher than what we usually expect, and there were some nice examples of metastases really shrinking,” said Choueiri. However, he cautioned, some of the responses were not durable and the tumors became resistant after several months.

The study was retrospective. Choueiri said a prospective phase II trial of cabozantinib is underway in France, “and hopefully this will be definitive.”

While surgery and radiation currently are the gold standard for treating brain metastases in kidney cancer, Choueiri said these modalities don’t always work or can’t be used in certain locations in the brain. “It would be good to have a systemic option for these patients,” he said.

Most kidney cancer patients with brain metastases also have metastatic spread to other organs. The new study showed that the response rate with cabozantinib treatment was roughly the same for these extracranial metastases as it was for the brain metastases.

The first two authors of the report are Laure Hirsch, MD, MsC, and Nieves Martinez Chanza, MD, PhD, both formerly of Dana-Farber and now at Cochin Hospital, University of Paris, France and the Jules Bordet Cancer Institute, Brussels, Belgium, respectively.