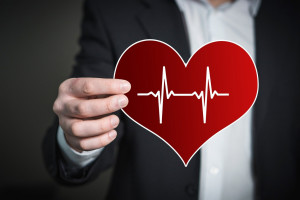 “Nearly half of women diagnosed with breast cancer will undergo radiation therapy, which may expose the heart to incidental radiation. For those who are under 50 years old when diagnosed with breast cancer, their 10-year survival rate is over 90% for Stage I disease and more than 75% for Stage II disease,” said Gordon Watt, PhD, a postdoctoral research fellow at Memorial Sloan Kettering Cancer Center and a study author.

After excluding women who did not receive radiation therapy or who had a preexisting cardiovascular disease diagnosis, 972 women were eligible for analysis.

All the participants were diagnosed with breast cancer between 1985 and 2008, were under 55 years old and had completed a cardiovascular health questionnaire. Clinical and lifestyle factors were distributed equally among both groups of women. The average follow-up time was 14 years.

Radiation-associated heart disease has a latency of at least five years, therefore requiring long-term follow-up of breast cancer survivors. Previous studies in older populations have shown left-sided radiation therapy is associated with increased risk of developing heart disease, although the level of risk varied between studies.

According to the researchers, the risk of heart disease after receiving radiation therapy had not been previously evaluated for younger women.

In all, 46 participants reported a coronary artery disease diagnosis with 91% of diagnoses occurring more than five years after radiation therapy. Only 9% of coronary artery disease diagnoses were reported within the first five years of follow-up, demonstrating the need for long-term follow-up in younger breast cancer survivors according to the researchers.

When evaluating the presence or absence of two or more cardiovascular risk factors, such as increased body mass index, smoking, high blood pressure or high cholesterol, there was little evidence for differences in the association between left-sided radiation therapy and coronary artery disease.

In an accompanying editorial, James Bates, MD, Ming Hui Chen, MD, MMSc, and Louis S. Constine, MD, wrote, “This study also reaffirms the role of prolonged surveillance for coronary artery disease in younger survivors. Give the latency between radiation exposure and development of cardiovascular events, it is important that young women who have received left breast radiation therapy be considered at higher risk over their lifetime.”