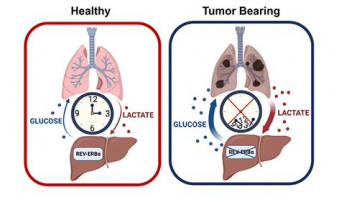 New research from the University of California, Irvine reveals how the circadian regulation of glucose production in the liver is lost during lung cancer progression, and how the resulting increase in glucose production may fuel cancer cell growth.

The new study titled, "Glucagon regulates the stability of REV-ERBα to modulate hepatic glucose production in a model of lung cancer-associated cachexia," published in Science Advances, illustrates how the circadian clock is regulated under conditions of stress such as during lung cancer progression and cancer-associated tissue wasting disease called cachexia.

"Our research shows that a critical circadian protein, REV-ERB?, controls glucose production in the liver.During lung cancer progression and specifically under conditions of cachexia, this circadian regulation is lost, resulting in increased glucose production from the liver," said senior author Selma Masri, PhD, assistant professor in the Department of Biological Chemistry at UCI School of Medicine.

"Based on our findings, we identified that lung tumours are able to provide instructive cues to the liver to increase glucose production, a major fuel source for cancer cells."

This research places the circadian clock as a central regulator of glucose production during lung cancer progression and provides important insight toward the development of novel therapeutics to target REV-ERB? to suppress cancer cell growth.

"We are continuing to investigate the consequence of increased glucose production during lung cancer progression by tracing the metabolic fate of this newly generated glucose to determine if this fuel source can drive the heightened metabolic demand of lung cancer cells," said Amandine Verlande, PhD, and Sung Kook Chun, PhD, postdoctoral scholars in the Masri Laboratory.

The circadian clock is our intrinsic biological pacemaker that maintains physiological homeostasis in all tissues of the body. Under conditions of stress, the biological clock is rewired as an adaptive mechanism to maintain synchrony and equilibrium throughout the body.

AACR 2022: AURORA study identifies molecular features tied to breast cancer tumour spread 12 Apr 2022
Lung cancer patients coped with pandemic better than many peers 15 Feb 2022
Magnesium is essential for the immune system, including in the fight against cancer 19 Jan 2022
Obesity might lead to cancer. Now we know why 14 Jan 2022
Gene involved in sense of smell could play a role in the spread of breast cancer to the brain 4 Jan 2022
Statin use affects prostate cancer screening results 30 Nov 2021
Study links increasing air pollution to the rise of a type of lung cancer 30 Nov 2021
Fat-secreted molecule lowers response to common cancer treatment 11 Nov 2021
Chemo helps breast cancer cells get their ‘foot in the door’ to the lungs 3 Nov 2021
Chronic stress may impact treatment completion and survival outcomes in patients with breast cancer 6 Oct 2021